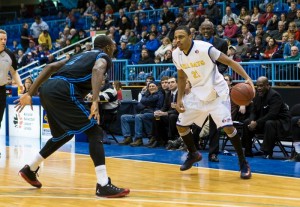 Last season he took his talents to Europe to suit up for the Bristol Flyers of the British Basketball League. In the BBL, Herring averaged 18 points, 3.9 rebounds, and 4.3 assists before an ACL tear prematurely ended his season after just 12 games. He had surgery in England and returned the United States where he rehabbed and returned to competitive basketball in the spring.

Herring went on an NBL Canada ‘All Stars’ team that toured China with Island Storm Head Coach Joe Salerno, and took part in million dollar ‘The Basketball Tournament’ for a team called Max’s All Stars this summer. He also led his team to the finals of the Greater Hartford Pro Am summer league for the second year in a row.

“I watched Doug scored 52 points in the Hartford Pro Am against a team of UConn players and NBA players,” said Mill Rats General Manager Ian McCarthy. “That convinced me he was back to his peak form and would be a great asset to reunite with Coach Spon.”

“Doug is an excellent two-way player in this league with great size for a guard,” said Mill Rats Head Coach Rob Spon. “He knows my system very well and we are looking forward to building on our past success this season.”