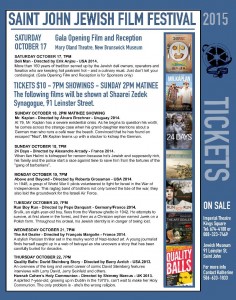 These films will include every genre including comedy, tragedy, documentary, biographical and historical. They will have a broad appeal and be entertaining while drawing on the Jewish experience.

The line up for the Saint John Jewish Film Festival is as follows :

Directed by Alvaro Brechner, Uruguay, 2014 – At 76, Mr. Kaplan has a severe existential crisis. As he begins to question his worth, he comes across a strange case when his grand-daughter mentions a German man who runs a café near the beach. Convinced that he has found an escaped “Nazi”, Mr. Kaplan teams up with a slacker to kidnap the German. English sub-titles

Directed by Alesandre Arcady, France 2014 – When Ilan Halimi is kidnapped for ransom because he is Jewish and supposedly rich, his family and the police start a race against time to save him from the tortures of the “gang of barbarians”. English subtitles

Directed by Roberta Grossman, USA 2014 – In 1948, a group of World War II pilots volunteered to fight for Israel in the War of Independence. This ragtag band of brothers not only turned the tide of the war, they also laid the groundwork for the Israeli Air Force.

Directed by Pepe Danquert, Germany/France 2014 – Srulik, an eight-year old boy, flees from the Warsaw Ghetto in 1942. He attempts to survive, at first alone in the forest, and then as a Christian orphan named Jurek on a Polish farm. Throughout his ordeal, his Jewish identity is in danger of being lost. English sub-titles

Directed by François Margolin, France 2014 – A stylish Parisian thriller set in the murky world on Nazi-looted art. A young journalist finds herself caught up in a web of betrayal as she uncovers a story that has been carefully buried for decades. English subtitles

Directed by Barry Avrish, USA 2013 – An overview of the long and varied career of comic David Steinberg features interviews with Larry David, Jerry Seinfeld and others.

Directed by Shimmy Marcus, UK 2013 – A spirited, sever year old, growing up in Dublin in the 1970s, can’t wait to make her Holy Communion. The only problem is – she’s the wrong religion.