Dear Saint Johners,
If we haven’t already had the pleasure of meeting, let me tell you a bit about myself. The city of Saint John means a lot to me. It’s where I chose to live, raise my family, work, and play. We share some of that in common, I am sure! We have a vibrant and beautiful city, from the natural beauty of Saints Rest Beach, to the many locally owned businesses, our city has so much to be proud of. Where there is work to be done, I hope you will choose to count on me to make it happen.
I grew up in Sussex NB, and moved to East Saint John in the early 80’s. I’ve held various jobs, as many of us do, working in all areas of the city. In 1988 I moved to PEI to attend the Atlantic Police Academy. After graduating I was hired on to the Saint John Police Force. Returning to Saint John, I fell in love, got married, bought a home on the west side, and raised two wonderful children.
Throughout this time I continued to work for the police department, supporting my community as a Patrol Officer, Major Crime Investigator, Traffic Officer, and D.A.R.E Officer. I did two summer tours of New Brunswick cycling around the province and also shaved my head all in support of Cops for Cancer. During this time I was also involved with the Police Union, holding seats in various committees. I was honoured to be voted President of the New Brunswick Police Association, which gave me a seat on the Board of Directors of the Canadian Police Association, which I held for 15 years, proudly representing New Brunswick and Saint John at a National Level.
Outside of work, I was involved in Ducks Unlimited, The Y’s Men, playing and coaching hockey, and volunteering with my children’s school activities. Being involved in my community has always been important to me. My neighbours are like my extended family. No matter which part of the city I’ve lived in, if you’ve been my neighbour, you know I’m always up for a good discussion.
I retired as a Sergeant in 2018, after having served nearly 30 years on the Saint John Police Force. One of my favourite parts of working as a police officer was working with the public. I never was one for sitting in the patrol car and enjoyed foot-patrol. This allowed me to participate in my favourite part of the job; engaging with community members and speaking with them about their concerns. Retirement hasn’t changed that for me. I still enjoy getting out in the public, speaking with my neighbours and community members; whether to learn about how they’ve been handling the COVID crisis, or to talk politics.
These conversations have led me to this moment. I was prepared to put my name forward in 2020, and the election delay has not impacted my drive to represent my city. If you know me, you know I speak my mind, and have a loud voice behind it. I hope you will let me use that voice to represent you for the next 4 years. I want our concerns about transparency and accountability, fair taxation, essential services and front line workers, as well as our city’s growth to be at the forefront of every conversation.
On May the 10th, I ask that you safely head to the polls, and vote for me as your City Councillor At-Large.
Sincerely,
Dean Secord 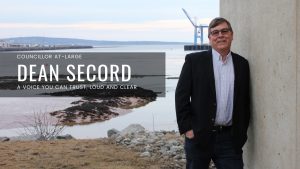