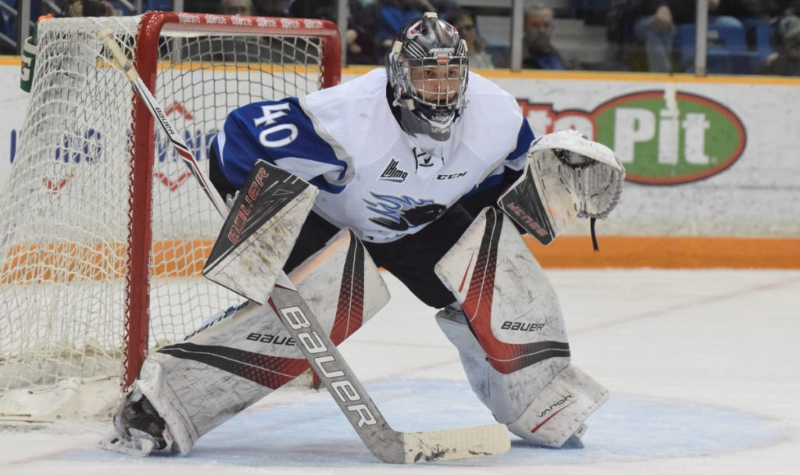 Bokondji Imama scored twice and Callum Booth made 25 stops to lead the Saint John Sea Dogs to a 5-0 victory over the Chicoutimi Sagueneens in Game 3 of the President Cup semifinals, Tuesday at Centre Georges-Vezina.

Saint John got the only goal of the opening period just three-and-a-half minutes in.

Matthew Highmore stole the puck on the right side of the Chicoutimi blueline and fed Imama, who was wide open in the middle of the ice. The overage winger took two strides and then blistered a heavy wrist shot over the blocker of Julio Billia and under the crossbar.

The Sagueneens had two power plays in the first period but could not score.

Kelly Klima created an even-strength chance in the final minute of the frame by taking a pass in the slot, dancing into the middle and snapping a low shot that Booth kicked away with his left pad.

There was no scoring in the second period, and Booth made sure his team kept the lead during a Chicoutimi power play with under three minutes remaining.

Joey Ratelle took a cross-crease pass near the right wing side of the net and fired a quick shot toward the goal. Booth lunged to his left to stymie the 20-year-old winger with his left pad. Defenceman Frederic Allard followed up moments later with a shot off the left post.

Imama carried the puck into the slot and ripped a wrist shot that deflected off of a Sagueneens’ defender and beat Billia under his glove.

Chicoutimi turned the puck over inside their own blueline. Julien Gauthier won a battle to the loose puck and created a short breakaway. He attempted a deke to his backhand, but Billia made the stop with his right leg.

The rebound ended up in the left corner. Spencer Smallman whipped it back in front to a streaking Veleno, who snapped it home.

Dove-McFalls won the ensuing faceoff at centre-ice, brought the puck forward and snapped a wrist shot from just inside the Chicoutimi blueline that beat a surprised Billia for two goals in six seconds, a new playoff team record.

Joseph wrapped up the scoring with more than eight minutes left.

Bailey Webster ripped a wrist shot from the right point that Billia stopped. Joseph corralled the rebound, stepped to his left and had his first rebound opportunity denied before burying the chance that followed.

Booth was named first star. Billia made 24 stops in the loss.

Imama’s two goals and seven shots on goal made him second star. Defenceman Simon Bourque was named third star with a +1 rating in front of a sellout crowd of 4,417 fans.

Saint John’s next home playoff game will be Game 5 on Friday, April 28th, at 7 p.m. at Harbour Station. Tickets are available now online, and at the Harbour Station Box Office during regular business hours.

← Is your city music-friendly?
Sea Belles’ Member Recognized as Barbershopper of the Year →