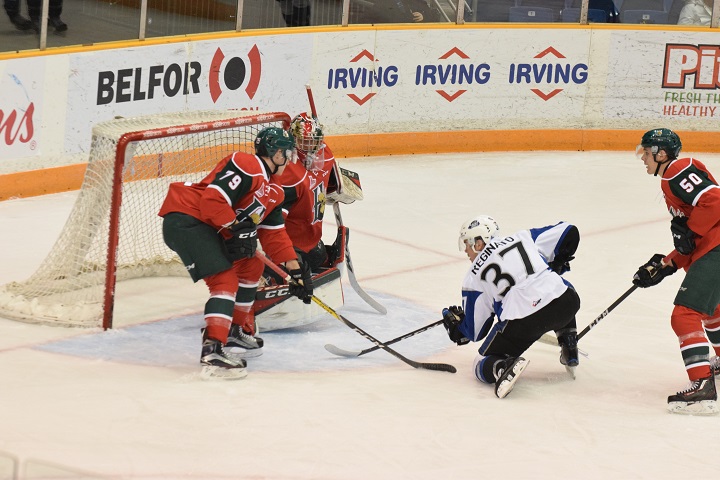 Matthew Highmore’s power play goal with under two minutes left in the second period proved to be the game-winner as the Saint John Sea Dogs defeated the Halifax Mooseheads, 5-3, before a season-high, sold-out crowd of 6,011 at Harbour Station.

Highmore, Nathan Noel and Samuel Dove-McFalls all contributed a goal and an assist for Saint John (40-13-5-1) while Cole Reginato and Bokondji Imama also scored. Noel became the eighth player in franchise history to reach the 200-point plateau.

The Sea Dogs opened the scoring nearly halfway through the first period.

Captain Spencer Smallman fed a pass from the right corner to the front of the net where Reginato redirected it over the glove of Moosehead goalie Alexis Gravel. Noel’s assist on the goal was his 200th point.

Halifax scored a shorthanded goal to tie the game with under six minutes left in the period.

Fortier and Nico Hischier created a turnover at their blueline and broke away 2-on-0. The duo exchanged multiple passes before Fortier potted a cross-crease snap shot into a wide open net.

Goetz gave the Mooseheads their first lead in the final minute of the period, deflecting a Frederic Aube point shot past the glove of Callum Booth.

The Sea Dogs evened the score again with their own shorthanded goal six minutes into the second.

Smallman tried to break away from the neutral zone but got caught by a backchecker. He curled into the left circle and threaded a pass across the slot to Noel, who slipped a shot along the ice and in between Gravel’s legs.

Coughler tipped in a power play goal for the Mooseheads near the ten-minute mark to give the visitors a 3-2 lead.

But Dove-McFalls replied just over a minute later.

The fourth-year centre grabbed the puck on the right side, turned back and skated to the middle of the blueline and fired a shot along the ice that fooled Gravel.

Highmore gave Saint John the lead again with a power play goal with 1:57 left in the frame.

The overager, who turns 21 on Monday, took a Dove-McFalls pass near the left side of the crease, deked to his backhand and shoveled a shot under Gravel’s blocker.

The Sea Dogs got into penalty trouble in the third, as Noel was assessed a five-minute major and game misconduct for a check to the head on Coughler. Another penalty also put the Mooseheads on a man advantage late in the game, but they could not tie the score.

Imama found an empty net with 49.8 seconds to play.

Booth earned the win with 18 saves. Gravel also made 18 stops in a losing cause.

Saint John’s next game is Wednesday, March 1st, at 7 pm against Halifax at Harbour Station. This is the make-up date for a game which was postponed on December 16th.

Season Ticket Holders are advised to keep their December 16th tickets and use them for the make-up date. Fans who purchased single-game tickets for December 16th can keep and use them for the game, or exchange them at the Harbour Station Box Office for any regular season home game. The deadline to exchange tickets is Wednesday March 1st at 7 pm. Conditions may apply. Details at the box office.

Tickets for Wednesday’s game are available at the Harbour Station Box Office, or fans can save money and buy online.