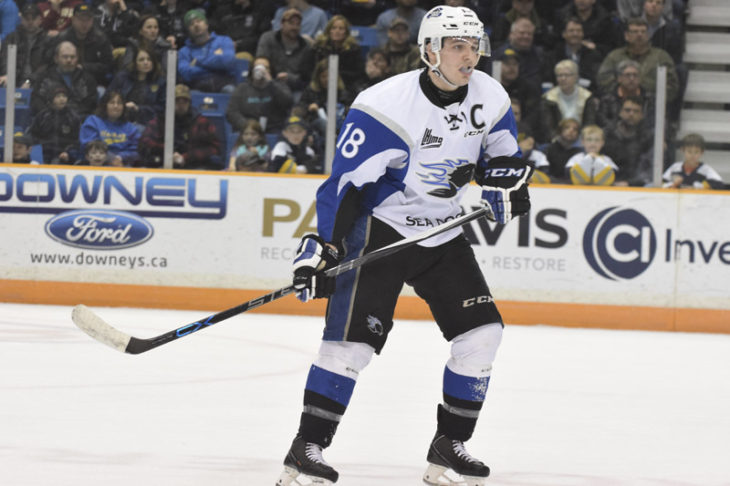 Alexandre Alain scored 3:37 into overtime to give the Blainville-Boisbriand Armada a 3-2 victory over the Saint John Sea Dogs Wednesday at Centre d’Excellence Sports Rousseau.

Spencer Smallman had a goal and assist for Saint John (5-2-1-0) while Luke Green also found the net. The Sea Dogs’ winning streak was snapped at five games.

The Armada opened the scoring with a power play goal four-and-a-half minutes into the game.

A shot from the point was blocked and bounced into the left wing circle. Perry, the son of former Saint John Flame Jeff Perry, flicked a quick wrist shot into the top corner, past the blocker of Sea Dog goalie Alex Bishop.

Bokondji Imama took a long shot from the right wing side that was stopped by Blainville-Boisbriand goalie Samuel Montembeault. Smallman pounced on the rebound, carrying it around the goal and stuffing it inside the right post on a wraparound. The goal gave the captain his 150th QMJHL point.

The home side regained the lead with eight minutes left in the period when Mongo gathered up an errant Saint John pass and darted toward the Sea Dogs’ goal on a partial breakaway. The 19-year-old winger chipped a shot that went off Bishop and in behind the goaltender.

Saint John netted the only goal of the second period, a power play strike with just over four minutes remaining.

Green took a pass at the right point and fired a low slap shot that snuck in under Montembeault’s right leg.

There was not further scoring until overtime.

Saint John’s best chance in the 3-on-3 came early when Smallman carried the puck into left side of the Armada zone and found Nathan Noel streaking to the net. The fourth-year centre steered a shot that touched the outside of the left post.

Alain’s winner came as Blainville-Boisbriand controlled the puck in Saint John territory for an extended period.

The 19-year-old centre took the puck in the left circle, got away from his checker, found a lane to the front of the net and slipped the puck between Bishop’s legs to end the game.

Montembeault picked up his fifth straight win with 27 stops. Bishop made 29 saves in defeat. He was named first star.

Green took second star honours with one goal while Alain snagged third star with the game-winner and seven shots on goal in front of 1,704 fans in attendance.

Saint John’s next game is Friday, October 14th, at 8:30 p.m. against the Rouyn-Noranda Huskies at Iamgold Arena. Listen LIVE on 96.1 New Song FM or newsongfm.ca. Watch LIVE on Neulion.

The Sea Dogs’ next home game is Wednesday, October 19th, at 7 p.m. against the Acadia-Bathurst Titan at Harbour Station. Tickets are available at the Harbour Station Box Office and online.

Season tickets and flex packages are on sale now at the Harbour Station Box Office or by calling 657-1234. Click HERE for pricing information. You can also download our Season Ticket  and Flex Package order forms. Be sure to check out our NEW flex package options, including 6-, 10- and 20-voucher allotments.