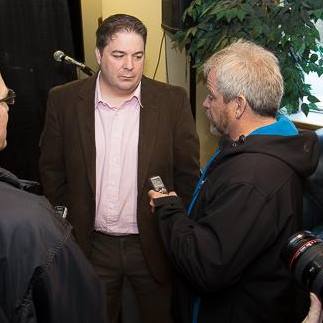 I have decided to return to the United States and rejoin my family there, and as such, I have stepped down as President and will no longer act as General Manager of the Saint John Mill Rats.

I had an exciting and thrilling 6 years in the Port City, in helping to create the National Basketball League of Canada, and making so many friends.  Some of my best memories in life were the energy felt at our home games, taking players to a school visit and seeing the kids eyes light up, and seeing the excitement in our fans chanting “lets go Mill Rats!”

I’m fully confident the Mill Rats organization can be lead by the 6th Man group into a new era, and that Saint John based local owners, employees, and volunteers will do a great job in continuing the Mill Rats as a flagship franchise.

I urge Saint John to support the Mill Rats, buy season tickets, sponsor the team – please don’t take it for granted!  Only a handful of cities in Canada have the privilege of having a professional basketball team.  And it would be a shame to see it no longer continue so please I urge all fans and business & civic leaders to support the team!

I want to thank everyone for their energy, efforts, and passion for the team and in doing our best to make it a success.  I know it wasn’t always easy, nor convenient, and everyone sacrificed something to participate in the team’s success, and for that I am grateful!

Minor professional basketball has been an 11-year odyssey for me which began as a side hobby on Cape Cod, then to Manchester New Hampshire, and then here to Saint John, and eventually became the National Basketball League of Canada.

I firmly believe the future of the NBL Canada is an upward trajectory towards success.  As Steve Nash said only recently, “we have just begun the Golden Era of basketball in Canada”.

It would have been nice to end this season with our first championship, but it did not work out.  I’ve learned over the years to win it all, you have to be both good and lucky at the same time.  Just ask the San Antonio Spurs this year, or Cleveland last year. I’m proud of the calibre of talent & people that we brought to the Mill Rats each year, under budget, and felt we had teams in several years that were capable of bringing home a championship. Hopefully that will be realized soon!

But the larger, and most important part of our mission was accomplished each and every year; and that was to be an inspiration to thousands of youth, supporting charities, providing a stage for entertainers, helping players & coaches develop careers, and providing quality entertainment enhancing the vibrancy of the City.

Seeing Gabe Freeman carrying the little boy across the court in a game to Cathy was an amazing micro-illustration of the impact of this team, and reading all of the love and wonderful sentiments for the team on social media, provides immense satisfaction that the mission is being accomplished.