New Brunswick has holiday traditions that have long been celebrated and handed down from generation to generation. Drawing on the collections of the New Brunswick Museum Archives and Research Library, here are several enchanting holiday memories of yesterday.

Included in the NBM Archives and Research Library holdings are a variety of beautiful historic photographs and published and unpublished items from holidays past, each containing an aspect of the New Brunswick story. These stories include a range of Acadian, Scottish, English, Irish and other traditions from yesteryear.

“A Visit from St. Nicholas” – in the New Brunswick Museum Archives

This poem, written by Clement Clarke Moore (1779-1863), also entitled “Twas the Night before Christmas” is familiar to many………but did you know that there is a New Brunswick connection?

At the NBM Archives, in the Odell family papers, there is a handwritten version of “A visit from St. Nicholas”. It was written in 1825, and very likely the handwriting is that of Jonathan Odell’s daughter Maryl. The Odell family were Loyalists who came to New Brunswick from New York in 1784 and the Moore and Odell families were friends in pre-revolutionary times. Jonathan Odell was the first Provincial Secretary of New Brunswick and was Clement Moore’s godfather. The families continued to correspond in the decades after the Odells left New York.

Clement Clarke Moore was proficient in languages and music and graduated from Columbia College in 1798. He became a professor at the General Theological Seminary, of the Protestant Episcopal Church in New York City and continued to serve as professor of Oriental and Greek literature until his resignation in 1850. He had also studied Hebrew, and in 1809, he published “A Compendious Lexicon of the Hebrew language” in 2 volumes.

The original poem “A visit from St. Nicholas” was written by Clement Clarke Moore in 1822, as a Christmas gift for his children; it was said to have been transcribed by a guest of the household and given by her to the press in Troy, N.Y and  was published anonymously in the Troy Sentinel,  Dec. 23, 1823. Since it was not a scholarly publication, as other material written by Moore, he was not anxious to acknowledge it publicly. However, in 1844 it was included in a collection of his poetry.

The NBM Archival collections include this and other correspondence between Clement Clarke Moore and the Odell family.

The collections that help discover the spirit of the season in New Brunswick also include greeting cards, postcards, letters, songs and poetry, expressing seasonal greetings and sentiments; historical photographs; ads for outdoor activities such as skating and sleighing; menus from hotels and other establishments holding seasonal dinners with menu items such as: reform sauce, corned tongue, Kummel Eckau ice cream, picalli, nesselrode, crapaudine and Victoria sauce; and examples of what local businesses and merchants were selling for the holiday season.

Listed below are a glimpse of collections portraying some holiday traditions in New Brunswick. 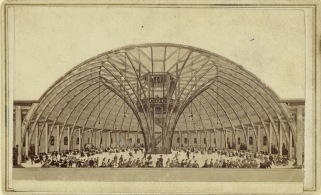 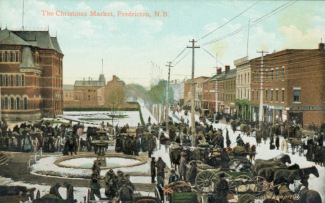 Within the NBM Archives, in the Saint John Jewish Museum archival collections, there is also material relating to the celebration of Chanukah, the festival of lights, by the Jewish community.

The Clement Clarke Moore handwritten poem “A visit from St. Nicholas” will be on display, with several other seasonal pieces from the NBM Archives, at the NBM Exhibition Centre, until Sunday January 3rd, 2016.

One Response to New Brunswick Museum’s Spirit of the Season