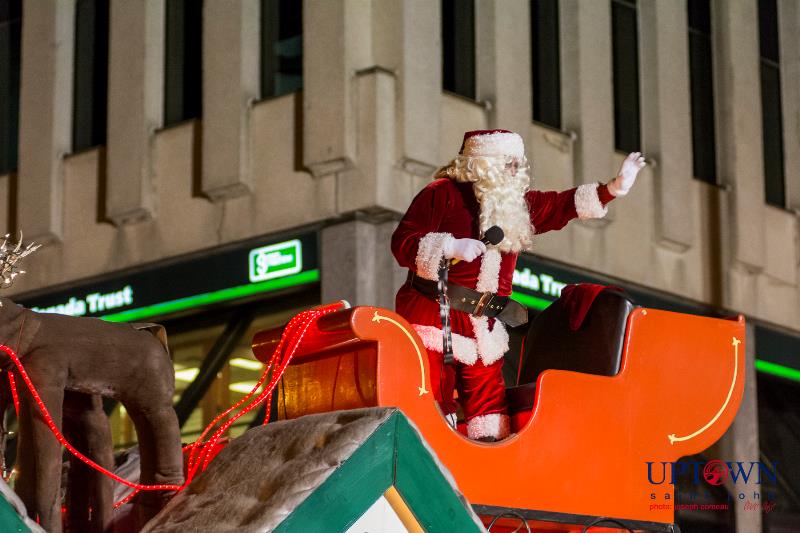 The 63rd Annual Santa Claus Parade is this Saturday, November 21st at 6 pm. The City of Saint John invites everyone to come out and enjoy the magic of the season with us!

The theme of this year’s parade is “A Cartoon Christmas – Past and Present” and the City is looking forward to all of the entries, unique, creative, and aglow with lights, as well as the marching bands and festive sounds of the season.

Please note that clean, gently used coats for the Coats for Kids Campaign will be accepted by the NBCC Students and Staff and Allied Health Education Centre. Also non-perishable food items for the Community Food Bank will be collected by the City Workers. And remember to bring your letters for Santa!

The honorary Parade Marshal is Mr. Peter Buckland. Mr. Buckland co-founded the Saint John Gallery Hops in 2000 and was one of the founding members of the Saint John Community Arts Board. He was awarded the Queen’s Diamond Jubilee Medal in September 2012 for his work in the arts and is an enthusiastic advocate for community development. The City is proud to present him in this important aspect of the parade.

PARADE ROUTE: The Parade Route will be the same route as last year. The parade will leave the Causeway, go onto Union Street, left on Sydney Street, right on King’s Square North, left on Charlotte Street, down King Street and on to St. Patrick, on to Main Street, right on Lansdowne Avenue, and right at Wellesley Boulevard. These streets will be closed off during the parade.

The Causeway (all four lanes) will be blocked off beginning at 3:30 pm on Saturday for parade line-up.

Citizens are asked to not park on King Street beginning at 5 pm.

Any vehicles parked anywhere along the parade route after 5:30 pm will be towed.

Please be aware of and obey all signage along the parade route.

Thank you to the parade sponsors:

The City of Saint John

So, dress warm, gather friends and family and join us in this special holiday event uptown!