On behalf of the Government of Canada

Funding will support raising the Courtenay Bay Causeway to prevent flooding during storm surges and rising sea levels as well as the construction of a new pumping station to allow for drainage of the forebay during high-tide conditions. These projects will help protect critical infrastructure and mitigate the impacts of climate change.

In addition, this investment will increase the flood resiliency of critical wastewater infrastructure across the city. The project includes rehabilitating and raising the berms to protect the Lancaster Wastewater Treatment Facility from flooding, replacing and raising the ultraviolet disinfection system at the Millidgeville Wastewater Treatment Facility and incorporating additional flood protection measures in the Lower Cove sewer system. The upgrades to these facilities are vital to mitigating the risk of damage from flooding, as well as reducing risk of sewer backup and the release of untreated wastewater into the environment.

By investing in infrastructure, the Government of Canada is growing our country’s economy, increasing the resiliency of our communities, and improving the lives of Canadians.

“With increasing extreme weather events, ensuring our communities have reliable disaster mitigation infrastructure is key to safeguarding the livelihoods of all residents. Today’s announcement will ensure that residents in Saint John are better protected from the impacts of climate change and its effects for years to come.”

Wayne Long, Member of Parliament for Saint John—Rothesay, on behalf of the Honourable Dominic LeBlanc, Minister of Intergovernmental Affairs, Infrastructure and Communities

“The impacts of climate change are felt by communities across Canada and Saint John, as a coastal community, is no exception. Making smart investments in critical infrastructure will help strengthen our resilience and mitigate the impacts of climate change and major weather events. Thanks to funding from Infrastructure Canada, the City can now proceed with key disaster mitigation projects at the Courtenay Bay Causeway, two wastewater treatment facilities and the Lower Cove sewer system.”

John MacKenzie, Deputy Mayor of the City of Saint John

· The Government of Canada’s funding for this project comes from the Disaster and Mitigation Adaptation Fund (DMAF).

· Federal funding is conditional on fulfilling all requirements related to consultation with Indigenous groups and/or environmental assessments.

· Launched in 2018 with an initial investment of $2 billion, the DMAF helps communities build infrastructure they need to better withstand natural hazards such as floods, wildfires, earthquakes, and droughts. Through Budget 2021, the Government of Canada invested an additional $1.375 billion in the DMAF. 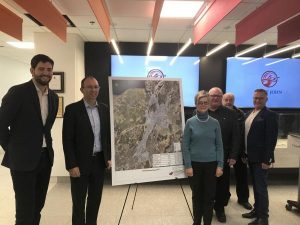