During National Police Week, the Saint John Police are proud to announce the recipients of our annual Awards and Recognition Ceremony held on May 12, 2022.

Kim Arsenault and Kelly Stanton for 30 years of dedicated and professional services to the citizens of Saint John.

Cst Derek Scaplen for his response to a barricaded male in a multi-unit residential area in Saint John. Upon arrival, as the on-site patrol supervisor, he applied proper tactics in a controlled and confident manner, which assisted in the safe, successful negotiations’ outcome in March, 2022.

Cst Derek Scaplen for his invaluable knowledge, skill and judgment, and life-saving actions, which saved the life of Mr. Colin McNichol in January 2022.

Cst Tyler White – while proactively gathering intelligence, he responded to a 911 call for medical assistance at a nearby location in Saint John. Upon arrival, he administered first aid on a male who sustained life-threatening injuries, then continued to investigate the crime scene, which led to the identification of suspects and the seizure of critical evidence in February 2022.

Dan Forbes for his 26 years of tireless, professional and honorable leadership, as an Operator, Trainer, Acting Supervisor and Supervisor in the Public Safety Communications Center, that is commended and congratulated.

Cst Shawna Doiron for her diligence, professionalism and investigative excellence that led to the safe return of a three-year-old child who was a victim of a parental abduction, taken outside the country in July 2021.

Cst Shanda Weir for her diligence, professionalism and investigative excellence that led to a dangerous offender being imprisoned for two years ensuring the safety and security of our community within the limits of the law in February, 2021.

Cst Tony Arsenault and Cst Ryan Wilson for their diligence, professionalism and investigative excellence that led to the successful de-escalation of an armed person who was subsequently arrested and imprisoned in August 2021.

Lynn Hamilton and Carla MacDonald for their invaluable knowledge, skill and judgment, and life-saving actions, which saved the life of Mr. Colin McNichol in January 2022.

“All of those, both sworn and civilian, recognized during the ceremony represent what we all aspire to be; selfless, courageous, and committed members of our community contributing to a safe, secure healthy Saint John” Chief R.M. Bruce 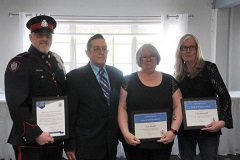