During the duration of the winter storm on Friday, January 7, 2022, the Saint John Police Force responded to approximately twenty motor vehicle collisions, ten of which were reported as motor vehicle accidents with injuries, mostly minor in nature.

Police also responded to approximately thirty-one other calls for service related to the storm, most of which involved vehicles stuck in the snow obstructing various roadways. Please monitor the City of Saint John social media channels to stay advised of any parking bans that may be in effect as clean-up from the storm continues. 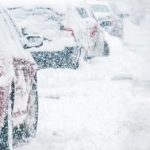