Faces Of The Saint John Fire Dept By Marc Carey

Saint John Firefighter Natalie Harvey.
Nat grew up in Maugerville, NB on the farm featuring the famous “Harvey’s Big Potato”. Excelling in hockey at an early age Harvey was the first female to make boys PeeWee AAA in 2000. In 2003 Nat
Played played for Team NB at the Canada Games and also attended the U22 Nationals in Edmonton as an underaged 16 year old.
From 2004 – 2006 Harvey studied Kinesiology at UNB Fredericton as the recipient of a full hockey/academic scholarship. Her heart set on being a Firefighter, she graduated from the Holland College Fire Academy in 2006. A year later Natalie moved to Calgary where she was offered a position with the Calgary Fire Department. Determined to return to the east coast she respectfully declined and in 2008 returned to NB to become a Saint John Firefighter. Here Nat is a class 3 operator with the versatility to drive and operate every apparatus on the job. Additionally she is a Haz Mat Tech and a high angle rescue team member. In 2011 we were thrilled to be part of the department that saw Natalie make history as the first active-duty Saint John Firefighter to have a baby!

In Natalies own words…
“His name is Daxon and he also dreams of being a fire fighter for the SJFD some day! I also have an amazing daughter who is 4 years old and her name is Jade.

”
When asked what she enjoys on her time off she replied…”I love hanging out with my family and friends spending lots of time outdoors, snowmobiling, skiing, boating and playing guitar.

”
We are proud to be part of a job that doesn’t recognize barriers of any kind. A job that constantly works towards equality in the workplace for all. Go get ‘em Nat….. 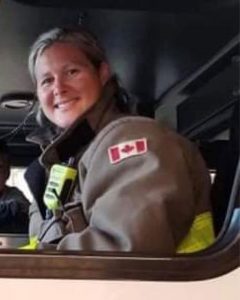