A small in-house ceremony was held on Thursday, May 13, 2021, as the Saint John Police Force recognized the outstanding work of its officers in recent calls and investigations.

“Teamwork is an essential element in everything we do.  Today we honoured both teams and individuals whose efforts exemplify the highest level of service”, says Acting Chief Tony Hayes.

Service Recognition Awards were presented to Constables Gogan, Lohnes and Jackson. Constable Gogan for his work into the investigation and recovery of a high priced, unique guitar stolen from Long and McQuade in the fall of 2020.

Constables Lohnes and Jackson have been recognized for their quick work and excellent skills in a robbery investigation that resulted in the apprehension of a suspect and charges being laid.

Constables Gilbert, Fowler, McCutcheon and White have all been recognized with the Team Endeavour Award for their work into the investigation of a string of bank robberies that began in January of 2020 and resulted in the apprehension and charges against a suspect.

Sergeant Summerville was presented with the Chief’s Silver Commendation Award for her assistance in reviving a baby that was born in the home of a couple in the spring of 2020. Summerville tied off the umbilical cord, laid the baby face down on her forearm, gave several thrusts to the back, massaged the lips and chest for stimulation and the baby’s breathing and color returned to normal.

The ceremony provided a reunion as well, as this was the first time Sergeant Summerville has seen the family and baby Ryker since the incident in the spring of 2020. Baby Ryker was made an honorary member of the Saint John Police Force. 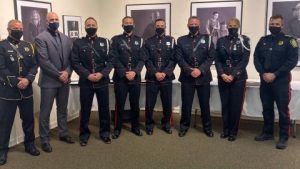