Three Saint John Firefighters were recognized for their courageous actions that saved a man’s life. Please join us in congratulating them.
Saint John Firefighters Captain Karl Conrad, Senior Firefighter Scott Goguen, and Senior Firefighter Trevor Price received the Certificate of Courage last night at the New Brunswick Association of Fire Chiefs Annual Conference held in Fredericton.
The honour was presented in recognition of their demonstration of bravery and selflessness after they entered a burning building earlier this year and successfully removed an unconscious man. Despite the danger and unpredictable nature of the situation they encountered, the three firefighters acted quickly to rescue the man caught in a life-threatening situation.
The man has since made a full recovery.
“It is very important for us to recognize our firefighters for their courageous action,” said Saint John Fire Chief Kevin Clifford. “Our members are very experienced and respond to approximately 5,400 calls per year. They regularly encounter situations that put their own lives at risk, and always approach a scene with the assumption that someone will need their help. You won’t hear them talk about their heroic actions often. They are very humble and most will say that it’s their job, and what anyone would do when faced with that kind of situation.”
All Saint John firefighters are trained at an advanced level of first aid, referred to as Medical First Responder. The firefighter medical first responder skills as well as the firefighter job performance requirement (JPRs) skills are reviewed and refreshed on a continual basis such that firefighters are able to intuitively perform tasks that are often needed during high pressure and urgent environments.
Clifford adds that, “Although our firefighters are prepared and respond without hesitation to unpredictable situations on a regular basis, the life-saving call of duty can take a toll and be very difficult for everyone involved. I am proud of the work our firefighters do every day to serve and protect our community.”
The New Brunswick Association of Fire Chiefs issued only three Certificates of Courage during the 2019 conference, ranking Saint John’s three in an elite list of members to earn the decoration. 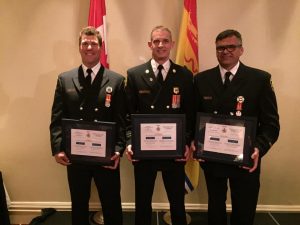 ← Chris Daigle For Ward 4
Greco To Open On Hickey Road →