Barry Ogden is a life-long resident of Saint John, starting out in Rockwood Court. Barry spent his early career working in the family-run business that grew from one small business into six businesses over the years. After leaving the family business, Barry received his B.A., B.Ed., and M.Ed. and spent his 33-year career teaching at Hazen White School, St. Peter’s School, and Saint John High School.

Throughout his life, Barry has dedicated his free time to the Saint John area through community-focused initiatives. His community involvement in Saint John began in 1973 when he first volunteered to coach minor football. Since then, Barry has spent countless hours spearheading volunteering efforts for community-focused initiatives that include youth sports, such as football, volleyball, soccer, and hockey and community projects, such as the Marigold Project, the Marco Polo Project, fundraising for foodbanks, Loyalist House restoration, and the Mural Project. At the core of motivation in community involvement is the desire to inspire fellow residents to be proud of their city and to empower them to act to make their lives better. 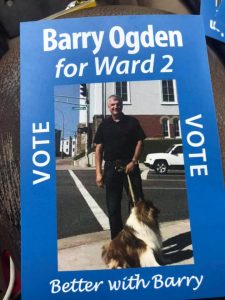