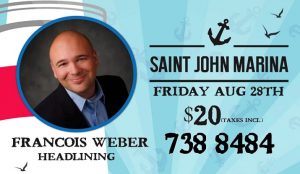 Come out to the Saint John Marina Club, located at 2050 Westfield Road on Friday, August 28th, 2020, beginning at 8 pm for “The Best of N.S. featuring François Weber!”

The show is hosted by Andrew Vaughan and featuring Travis Lindsay and Ian Black.

His energetic story telling style strikes a chord with young and old, clubs and conventions.

Tickets will also be available at the Marina when it opens for the season.