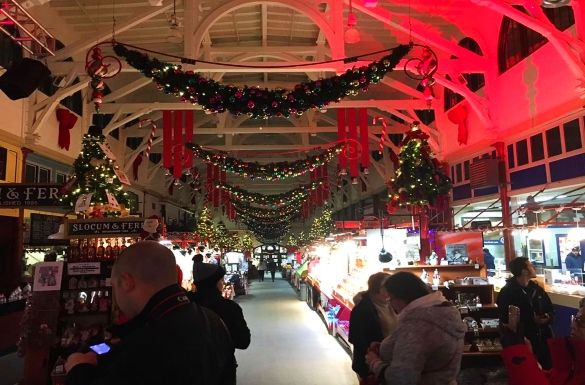 The biggest road show of all! On Friday, December 13th, 2019, beginning at 6 am, come out to the Saint John City Market 47 Charlotte Street, Saint John, New Brunswick and join the team of CBC Saint John Information Morning and CBC New Brunswick with the Harbour Lights elves as they raise funds for the 2019 Campaign which will assist for food banks from Sussex to Saint Stephen all year long.

What is the Harbour Lights Campaign?

The Harbour Lights Campaign was born in 1997, when CBC Saint John Information Morning were thinking of a campaign that would help support food banks in the difficult time between Christmas and Easter.

Over the Christmas holidays, people are very generous. But after Christmas, when the bills start coming in and heating costs start going up, fundraising gets harder and harder and the people who use food banks need help more than ever.

The CBC Information Morning team of the day thought a huge tree on the waterfront would be fabulous. Money could be raised by selling the lights. They wanted a campaign that everyone could be part of.

A light that cost $2 seemed like it might work. But they had a problem. CBC had no way to construct a tree and no land on which to build it.

That’s when CBC called Port Saint John for help. The Port immediately began designing a ‘tree’ that has become a holiday season icon in our city.

Over the years Saint John Energy joined in by helping to offset cost of power for the massive tree which consists of more than 50,000 lights, plus a massive star.

Together, the campaign partners and the community have contributed more than $2.7 million to food banks over the past 21 years.

These foodbanks stretch from Saint Stephen to Sussex and the volunteers and patrons have come to rely on this vital support.

Each $2. donation lights a bulb. And as December progresses bulb by bulb the tree is lit. When the financial goal is met, the star on top is lit up, too!