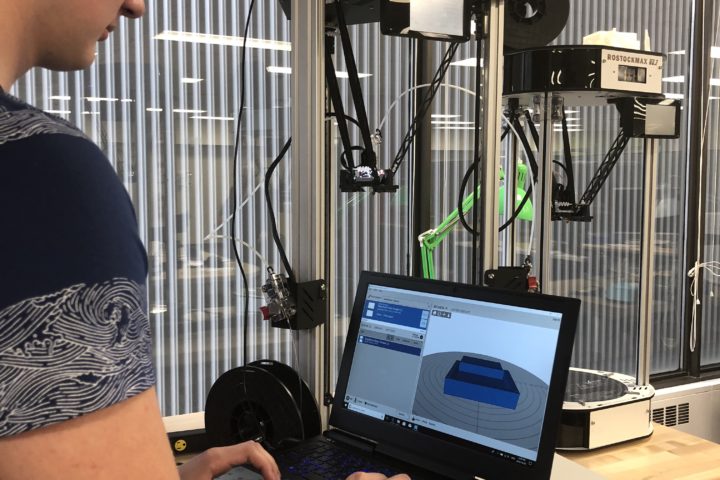 A pilot project meant to encourage more young people to stay in Greater Saint John and pursue entrepreneurship has evolved far beyond its initial concept.

“Last year we were trying to figure out how to best help young people look for careers and entrepreneurship in Greater Saint John. We started the high school accelerator as a pilot project. We knew there were kids who wanted to pursue ideas at a faster rate than a traditional classroom could offer. I worked with Ries Van Beek with St. Malachy’s high school and the Anglophone South School District and the kids and program far exceeded our expectations,” says Michele Lodge of Enterprise Saint John’s, Emerging Entrepreneurs Program and the IDEA Centre.

The high school accelerator is now called the IDEA Centre, which stands for Innovation, Development, Entrepreneurship and Action.

“Our main target is high school students and fancier terms like accelerator needed more explanation. Idea Centre is exactly what it suggests. If you have an idea, bring it here and we’ll help you make it real,” adds Ries Van Beek, a teacher with St. Malachy’s high school and co-lead with the IDEA centre.

Last year 12 students were involved in the one semester pilot program to work on business ideas with educators, business leaders and companies. This year, in partnership with Brilliant Labs, more than 30 students can do the same things but also access a maker space with 3D printer, screen press, soldering kits, virtual robot and other technology.

Graham Wallace is a student from last year’s program who has been hired by Brilliant Labs to document the Maker Space and help other students. At the same time, he is pursuing his business of creating adjustable hockey socks that don’t need hockey tape. He’s developed the product, tested it with the Saint John Sea Dogs and other hockey players, has a provisional patent and recently secured a manufacturing deal with local manufacturer. With all of that excitement going on in his life, he is still anxious to build excitement among other would-be entrepreneurs.

“I love the aspect of helping others, through my experiences but also showing other youth in schools that they can start their own business and grow their own ideas. Now that we have a Maker Space anything is possible. 3D Printers, a soldering kit, heat press for logos, t-shirts, mugs and hats, game development, video editing, green screen studio. I’m so excited for the students and the community as whole to partake.”

Some students are exploring more than one idea at a time.

“We have one student who is getting help with coding and app building to match pets in need of a home with people interested in adopting a pet. Her other idea involves research with 4 high schools to solve hallway congestion with a program to address it and improve school culture,” says Van Beek.

This type of innovation and ideation is exactly what program coordinators want to see.

“Kids will rise to amazing heights without limits. One of the things we want to do is engage them in the community, so they will stay. They don’t have to go away, or they can go away and study and come back,” says Lodge.

The Idea Centre and Brilliant Lab’s maker space will be open for participants with Startup Weekend to check out during November 16-18.