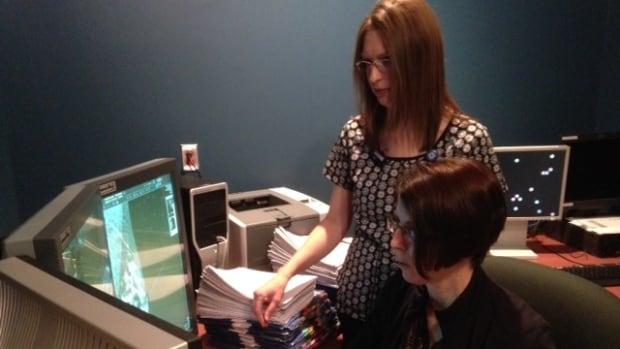 At least 35 radiation oncology patients who had appointments at the Saint John Regional Hospital on Tuesday morning had their appointments cancelled because of the computer outage. (CBC)

The computer systems at both of the province’s regional health authorities are down, forcing them to revert to paper files, cancel some services and turn some patients away, CBC News has learned.

There is no word yet on the cause or how long it might take to fix.

“Vendors and SNB technical staff were immediately informed and have been on site since to conduct diagnostic and repairs,” Kilfoil said in an emailed statement.

“A number” of provincewide clinical applications at the Horizon Health Network and Vitalité Health Network were affected, she said, without elaborating.

The Horizon Health Network is dealing with a “major outage,” affecting “every conceivable department,” confirmed Brenda Kinney, executive director for the Saint John area, which stretches from Sussex to St. Stephen.

Vitalité Health Network officials could not immediately be reached for comment, but Kinney said the network is also experiencing “some impacts.”

Thirty radiation oncology patients who had appointments scheduled at the Saint John Regional Hospital on Tuesday morning, for example, had their appointments cancelled and up to another 65 slated for the afternoon could also be cancelled if the system isn’t restored soon, she said.

“As it progresses, it causes more challenges” because having to write things down takes longer and slows everything, said Kinney.

“So it all depends on the extent and length of the outage as to what the actual impact will be,” she said. “The longer it goes, the bigger the impact.”

Horizon is “trying to ensure that [it’s] not impacting patient care to any degree that [it] can prevent,” said Kinney.

Plans are underway to bring in extra staff and possibly extend hours of operation to help with any backlog and to input data once the systems are restored to ensure electronic records are up to date, she said.

John Bone, an 80-year-old with diabetes, wondered why the media or affected patients like him weren’t notified.

He fasted for 13 hours to get some routine blood work done, but when he went to the Market Place Wellness Centre on Saint John’s west side around 9 a.m., he was told he couldn’t be served.

“They told me that all the computers were down. So I said, ‘Well cant you just go the old-fashioned way and just write it down on a piece of paper in a file?’

“They said, ‘No, we have to have a computer to put your name in and find out what everything is.'”

Bone and his wife of 50 years, Ann, who “wasn’t impressed” about having to get up early to drive him, weren’t pleased. Bone said he was “almost falling over” because of low blood sugar levels from fasting.

Kinney could not speak to what Bone was told but did say switching to a paper-based system at some of the smaller centres, such as blood clinics, “slows things down to the extent that they really can only do priority patients … those that it’s absolutely urgent that they have their blood tests done.”

“In some areas, they did stop doing specimen collection altogether.”

Affected patients will be rescheduled, but the scheduling system is also down, so staff could not immediately provide new appointments, said Kinney. Patients will be contacted at a later date,” she said.

Kinney said she understands the frustration some patients may be feeling.

But it would be “very challenging … almost impossible,” to contact the “hundreds and hundreds” of patients individually with existing resources, she said.

And without knowing how long the outage would last, the system could be back up and running by the time patients arrive for their appointments.

“We don’t want to cancel a whole day if the system’s only going to be down for a short period of time,” Kinney said.

Horizon officials started noticing around 6 a.m. that “several” of its computer applications either weren’t working or were intermittent, said Kinney.

They were notified by their IT department through Service New Brunswick that they “in fact were experiencing a major outage,” she said.

That’s when staff were advised to go to manual processes, which is normal procedure during any computer downtime.

Service New Brunswick has been in regular communication with the regional health authorities, said Kilfoil, “and this will continue until the issue is fully resolved.”