MIRAMICHI – The 2017 angling season for spring salmon and striped bass is underway for the Miramichi system.  However, the weather has not been the most conducive to heading out.  We have been plagued by very cold temperatures and bouts of wet snow which not only have made angling uncomfortable, but has also kept the rivers quite high and dirty.  But there were some hardy souls who braved the elements and were rewarded.

W. W. Doak and Sons in Doaktown said angling on Saturday was quite slow, but picked up on Sunday.  But rain curtailed fishing Monday, although the catching was positive on Tuesday and Wednesday.  Since Tuesday the water had dropped off and was clearing giving ideal conditions.  Anglers were getting a good mix of salmon and grilse.  The fish were described as being in good shape and fighting well, with a couple of 38-inchers reported. Flies of choice were Renous Specials, Christmas Trees. Black Ghosts, Golden Eagles, Smelts and Marabous.

Andrew Anthony of Ledges Inn in Doaktown and Mountain Channel in the Rapids area said angling was slow, but considering the cold weather and high and dirty water, it was not too bad.  It had dropped two feet by Wednesday and was clearing nicely.  There were not many anglers out, but those that braved the conditions had done well mid week.  There had been a couple of salmon in the 40-inch range. Flies of choice were Black Ghosts, Red Eagles, Renous Specials and Black Marabous.

Herb Barry Sr. of Herb’s Fly Shop on the Station Road in Blackville said anglers were catching some, but fishing was not great as the water was very high and dirty with an odd cake of ice here and there.  Not many were out yet due to the cold and wet weather.  Catches were mostly grilse thus far. Flies of choice were Golden Eagles and Silver Smelts.

Curtis Miramichi River Outfitting in Blackville said angling was a little slow and the water was very high and dirty.  No fish were reported on Saturday and only a few Sunday.  Some anglers had moved over to the Renous River which was a bit cleaner, and had picked up some salmon and grilse.  But the weather has been cold. Flies of choice were mostly the Golden Eagle along with some Black Ghosts, Blue Smelts, and Renous Specials.

Jim Laws of Miramichi Hunting and Fishing in Newcastle, Miramichi reported just an odd striped bass being caught in the lower part of the river near Gordon’s Wharf.  There were also a few spring salmon reported, but not many yet as not a lot of anglers were out as it was too cold.  Generally, the water was quite high. Flies of choice were Mickey Finns, Golden Eagles, Black Ghosts, Renous Specials, Smelts and Christmas Trees.

Syd Matchett of Trout Brook Fly Shop on the Northwest Miramichi said angling was quite slow on the weekend, but had improved by Tuesday with some boats limiting out.  The water was very high and dirty, but began to clear and drop by Tuesday.  There seemed to be slightly more salmon then grilse being hooked.  There were a couple of salmon in the 38-inch range.  The ice was still on the Northwest below the Red Bank Bridge at Whitney. Flies of choice were Golden Eagles, Renous Specials and Mickey Finns.

Debbie Norton of Upper Oxbow Outdoor Adventures on the Little Southwest Miramichi said her sports were doing well.  On April 15 to17 they fished the Southwest as ice was still in at her place.  The weather was cold but they did catch some.  On Tuesday and Wednesday of this week the ice had gone at Upper Oxbow and they fished there with good results.  She said the water was actually low and it was a long time since the ice went out there and was still in at Whitney.  They were catching a good mix of salmon and grilse. Flies of choice were Black Ghosts, Golden Eagles and Mickey Finns.

Last weekend produced poor fishing conditions and was also the Easter weekend, so combined, not a lot of anglers were out.  However, numbers should increase substantially this weekend. So bundle up and get out and “on the water”.

A new angling group was formed in mid March, 2017.  It is the Coalition for Better Salmon Management (CBSM).  It aims to push DFO to better manage the Atlantic Salmon fishery with more openness and communication.  Already it has a membership of over 700 and is continuing to grow.

“the recent announcement (April 13th) by DFO on the Atlantic Salmon angling regulations for New Brunswick, whereby they have decided to once again maintain the status quo, clearly demonstrates just how “stuck in the mud” they really are and how badly they need a push to get them moving down the road towards river-by-river management .”

(See the cartoon and poster below, and click on the link to get more on the Coalition and its aims and philosophy as well as membership information.) 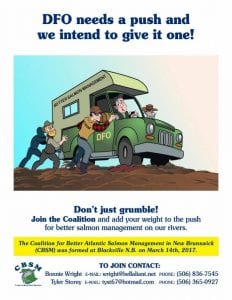 Thought for the Week: “Fishing provides that connection with the whole living world. It gives you the opportunity of being totally immersed, turning back into yourself in a good way. A form of meditation, some form of communion with levels of yourself that are deeper than the ordinary self” Ted Hughes 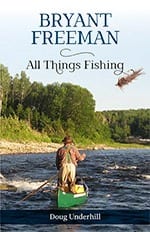 I see the nb government got their hooks into every fisherman’s pockets with increasing license fees. we are hooked but not released!!
Fr William Murray

Hi Doug, great to see you back! Hope the winter went well….put me down for a copy of the new book on Freeman, he and I collaborate on little projects for conservation, we’ve been insetting his classic feather wing flies with my classic salmon fly prints, he’s a good man I enjoy working with him and we are raising some good money for the salmon.
All my best,
Daniel
Ps I’m doing an interview with Harry Forestell on my work abroad this Tuesday, I’m told it will air Wednesday or Thursday THIS week.
Daniel Porter Fine Arts

Hi All
Well the 2017 angling season will soon begin – ice still covers much of the Northwest Miramichi System with jams and open water above Curventon. The Southwest is pretty well open down to Quarryville – two more days will make a big difference.

DFO issued a press release today stating Catch and release remains in place for the 2017 Atlantic salmon recreational fishing in the Gulf Region to maintain conservation benefits. I have attached the press release here. As well, a notice to recreational anglers can be viewed at  http://www.inter.dfo-mpo.gc.ca/Gulf/FAM/Recreational-Fisheries/Rec-Salmon-Conservation-Measures-2017

Striped bass season also opens on the 15th. DFO earlier issued a press release regarding the 2017 season – I have pasted this release below and I have highlighted the issues pertaining to the Miramichi. The local paper published a story earlier this week which I have attached regarding the Striped Bass Fishery with quotes from MSA Director / MWMC President Debbie Norton.

CAST (Collaboration for Atlantic Salmon Tomorrow) is in full swing with hatchery renovations continuing here in South Esk and our first collected salmon getting ready for release this fall – for more information on CAST you can visit the website at http://castforsalmon.com/ and also read the attached story published today on a three day meeting held earlier this week regarding the salmon supplementation program we are heavily involved in.

If you are in Fredericton next week please join us for a pub night – Wednesday April 19th at Greystone Brewing. It will begin at 5:30pm – a $10 cover charge gives you a brew and appetizers and an opportunity to discuss everything happening on the Miramichi this season. Everyone is welcome.

I would also like to remind everyone that the 64th Annual General Meeting of the Miramichi Salmon Association, Inc. will be held on Saturday, April 29th at 1:00 PM at the Upper Miramichi Community Centre in Boiestown.

Please also be reminded that the 21st annual Miramichi Ice Breaker Dinner is taking place the same day at the Central NB Woodmen’s Museum (starting with the reception/silent auction at 4:30, dinner at 6:00 and Live Auction at about 7:00 PM).  Please come and share in the celebration of the opening of the 2017 fishing season on the Miramichi River and pay well deserved tribute to the people along the watershed – residents, outfitters, guides, cooks, lodge staff, anglers.  Tickets are almost sold out and are $60 each – please let me know if you need a ticket.

As part of the “Ice Breaker Weekend”, the Miramichi Watershed Management Committee (MWMC) and MSA will jointly host an Information Session on Friday, April 28th at the Central NB Woodmen’s Museum from 10:00 AM to 3:30 PM.  This is a full day gathering of guest speakers and opportunities for discussion of matters of interest affecting the Miramichi River and its surroundings. Lunch will be served so again please let me know if you would like to attend.

If you get out on the river this weekend please stay safe!

Yours in Conservation
Nola
MSA

Striped Bass Recreational Fishery in the Southern Gulf of St. Lawrence in 2017

Moncton, New Brunswick – March 31, 2017 – Fisheries and Oceans Canada (DFO) today approved the Plan for Striped Bass Recreational Fishing in the waters adjacent to the Maritime Provinces in the Southern Gulf of St. Lawrence for 2017.

This year, fishing days are added, distinct seasons are established for tidal and inland waters, and retention of Striped bass is authorized every day of the fishing season.

The following management measures will apply during the 2017 Striped bass recreational fisheries:

‘The Ocean is the War’: The $9M Fight to Save Miramichi Salmon (pdf)

The post Miramichi Fishing Report for Thursday, April 20, 2017 appeared first on Giver on the River.