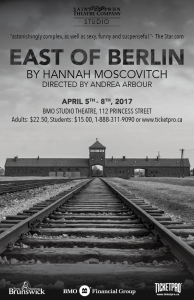 The Saint John Theatre Company (SJTC) have announced the cast of East of Berlin, a Holocaust play from a different perspective, coming to the BMO Studio Theatre from April 5th to the 8th, 2017.

East of Berlin stars Cameron Secord as Rudi, Rotem Fenichel as Sarah, and Matt Hamilton-Snow as Hermann. The production is directed by Andrea Arbour and stage managed by Karen Hatt. SJTC congratulates the cast and thanks all who auditioned!

Questioning redemption, love, guilt, and the sins of the father.

East of Berlin examines the next generation of Germans, those whose parents were members of the Nazi party and who resettled in Paraguay. Standing outside his father’s study, Rudi is smoking cigarettes, trying to work up the courage to go in. It has been seven years since he stood in that same spot; seven years since he left his family and their history behind him. As a teenager, Rudi discovered that his father was a doctor at Auschwitz. Trying to reconcile his inherited guilt, Rudi lashed out against his family and his friends, and eventually fled to Germany. While there, he follows in his father’s footsteps by studying medicine, and falls in love with Sarah, the daughter of a Holocaust survivor. East of Berlin is a tour de force that follows Rudi’s emotional upheaval as he comes to terms with a frightening past that was never his own.

East of Berlin by Hannah Moscovitch runs at the BMO Studio Theatre, 112 Princess Street in Saint John, NB from April 5-8, 2017.