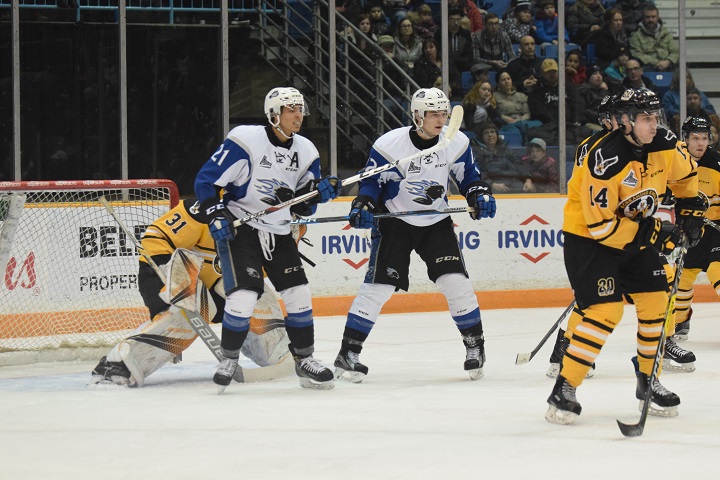 Mathieu Joseph had a goal and two assists for Saint John (26-12-3-1) while Matthew Highmore and Julien Gauthier each added a goal and an assist. Joe Veleno, Alexandre Bernier and Samuel Dove-McFalls also scored.

Batherson scored the only goal of the first period, on a 2-on-1 rush more than nine minutes in.

The Screaming Eagles’ winger took a pass on the right side of the slot, deked to his backhand and beat Sea Dog goalie Alex D’Orio on his glove side.

Highmore tied the game eight seconds into the second, firing a long wrist shot from the left side that slipped under the glove of Kevin Mandolese and rolled across the goal line.

Veleno tallied a shorthanded goal at the ten-minute mark to make it a 2-2 game.

The QMJHL’s first overall pick in 2015 helped create a turnover at his own blueline and darted forward on a breakaway. He deked to his forehand and beat Mandolese on his blocker side.

Bernier gave the Sea Dogs the lead 59 seconds later when his shot from the right circle bounced off of Mandolese and another player in front of the net and skipped into the goal.

Fiore buried his hat trick in a 3:32 span late in the period, capping it off with a one-timer from the right circle that beat D’Orio over his blocker to make it a 5-3 game.

Gauthier cut Saint John’s deficit in half with a power play goal with only nine seconds left in the period.

The 19-year-old forward, who was playing his first home game since his acquisition, carried the puck on the left side of the Screaming Eagles’ zone, cut to the middle and ripped a wrist shot inside the right post.

Dove-McFalls electrified a large Harbour Station crowd six minutes into the final frame with a goal to tie the game at 5-5.

The fourth-year centre drove the net from the left side, took a short pass from behind the net by winger Cole Reginato, stepped into the crease and tucked a backhand shot through Mandolese’s legs.

But McCormick gave the visitors the lead again nearly two minutes later, burying the rebound of a Fiore shot from the slot.

Smith scored the eventual game-winner with about nine minutes remaining in the third period.

The former Sea Dog prospect took a cross-crease pass on a 2-on-1 and snapped a one-timer past Booth’s glove.

Joseph got Saint John back within one with more than five minutes left, finding the puck in a scramble on the left side of the crease and sliding it underneath Mandolese.

But the Sea Dogs were not able to tie the score again.

Fiore’s four points and ten shots on goal made him first star while Batherson was named second star with three points and a +4 rating. Gauthier’s two points prompted a third-star selection in front of 5,476 fans in attendance.

Saint John’s next game is tonight Tuesday January 17th, against the Moncton Wildcats at the special start time of 8 pm at Harbour Station. Tickets are available at the Harbour Station Box Office, or fans can save money and buy online.