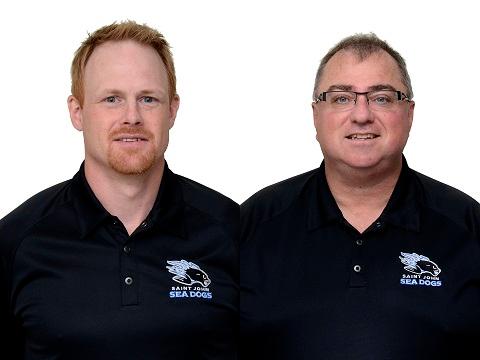 General Manager Darrell Young announced Thursday the Saint John Sea Dogs have extended the contracts of assistant coaches Jeff Cowan and Paul Boutilier.
Terms of the extensions were not disclosed.
Cowan, 39, joined the Sea Dogs as an assistant coach in November 2013 and has worked primarily with the club’s forwards and penalty killers.
The Scarborough, Ontario, native played 209 games in parts of four seasons with the American Hockey League’s Saint John Flames 1996 and 2000. Beginning in 1999, he accumulated 434 NHL games over eight seasons with the Calgary Flames, Atlanta Thrashers, Los Angeles Kings and Vancouver Canucks.
Boutilier, 53, joined the team prior to the 2014-15 season as the director of its newly-created Player Development & Analytics program, where he worked primarily with defencemen. He was named an assistant coach in 2015.
The Sydney, Nova Scotia, native played parts of three seasons in the QMJHL with the Sherbrooke/Saint-Jean Castors, and won the Emile Bouchard Trophy as Defenceman of the Year in 1982. A 1981 first-round selection of the New York Islanders, Boutilier won a Stanley Cup with the club in 1983. He played 288 NHL games over parts of eight seasons with the Islanders, Boston Bruins, Minnesota North Stars, New York Rangers and Winnipeg Jets.
“We’re very happy to have Jeff and Paul back with our staff this fall,” Young said. “We believe we have one of the top coaching staffs in all of junior hockey. Our players respect them because they played the game. They were a big part of our success with special teams, face-offs, defensive coverage and several other aspects of our game last year.”
Cowan and Boutilier will continue to work with head coach Danny Flynn.
← Donovan Recognized with Hockey Canada Order of Merit
Ellerdale & Area Community Clean-Up & BBQ →