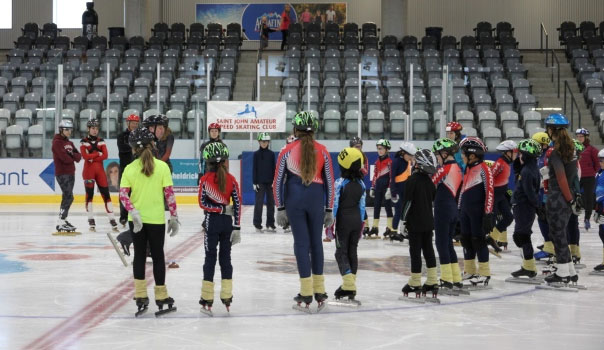 However, the Skate into Summer camp, hosted by the Saint John Amateur Speed Skating Club, has a full-sign up list and takes place at the Q-Plex in Quispamsis from July 7 to 10.

Sofia Lamprea, an assistant coach, said she always enjoyed summer camps when she was a young athlete.

“They reminded me of certain things that I could work on throughout the year before the next season started up,” she said.

“Summer’s usually when you get the most work in — technique wise, strength wise — so when you get to the winter, you can just work on speed and get ready for the competition.”

The summer camp is open to skaters of all skill levels and focuses on developing power, strength and speed.

Peter Steele, the head coach of Speed Skate New Brunswick, said camps, such as these, can be a great place to take a skating career to the next level.

“For me as provincial coach, I just look at our sport in our province,” said Steele.

“We’re not a very big province. We go to Canada Games. We do well. We’ve had kids on the national team from New Brunswick.”

This year marks the third edition of Skate Into Summer.

It is one of the only summer camps of its kind in the Maritimes and it has drawn attendees from New Brunswick, Nova Scotia, Prince Edward Island, Nunavut and Newfoundland and Labrador.