At its meeting on September 26, Saint John Common Council voted unanimously to appoint Brent McGovern as the incoming Chief Administrative Officer (CAO), a title currently referred to as City Manager. Mr. McGovern will assume the top municipal position in an acting capacity on December 15, 2022, and permanently following the current City Manager, John Collin’s, retirement on January 3, 2023.

“As we bid farewell and best wishes to Mr. Collin upon his retirement from a tremendously successful four years with the City, we are proud to welcome Mr. McGovern as our next CAO,” says Acting Mayor John MacKenzie. “Over his many years of public service, Mr. McGovern has gained the utmost respect of Council and has shown himself to be a skilled and genuine collaborator, a strategic thinker, and innovative leader. His in-depth understanding of the City as an organization and the services it provides, along with strong working relationships with staff and the City’s many partners and stakeholders, make him a perfect fit for the position.”

Mr. McGovern has had a long and esteemed career with the City of Saint John, since first joining the organization as a municipal design engineer in 2000. Since then, he has held several engineering, director and executive leadership positions.

From 2011 to 2015, Mr. McGovern’s career took him to California where he worked as a senior manager in the private sector before returning to Saint John with his family.

In 2015, he was the project manager responsible for the implementation of the City’s One Stop Development Shop, a best-in-class development service that supports growth opportunities in Saint John.

From 2016 to 2020, Mr. McGovern held the position of Commissioner, Saint John Water, the City’s water and wastewater utility, where he managed an annual budget of $55 million and assets worth over $1.2 billion. While in this role, he successfully led the $225 million Safe, Clean Drinking Water Project to its completion, the largest municipal infrastructure project in New Brunswick’s history.

Mr. McGovern’s responsibilities expanded further in 2020 when he was appointed to his current position as Commissioner, Utilities and Infrastructure. In this role, he oversees all operations of Saint John Water, engineering design and project management of the General Fund and Utility Fund Capital Programs and the City’s many infrastructure, asset and energy management business lines. He also leads the City’s infrastructure funding opportunities and manages several strategic partnerships.

Mr. McGovern is equally as excited about his appointment as incoming CAO and expresses his gratitude to Council for their decision. “I am honoured by the privilege of being appointed as the next CAO and the opportunity to lead our dedicated and professional staff in the excellent work they do to serve our community and move Saint John forward.”

Mr. McGovern will oversee the City’s day-to-day operations and the execution of the Mayor and Council’s priorities and vision along with the City’s 10-year strategic plan.

In addition to his 18 years of public service, 17 of which have been with the City of Saint John, he also has several years of leadership experience in the private sector (2011 – 2016).

Mr. McGovern has successfully led a variety of large complex operations and projects of all sizes, up to and including the City’s $225 million Safe, Clean Drinking Water Project. 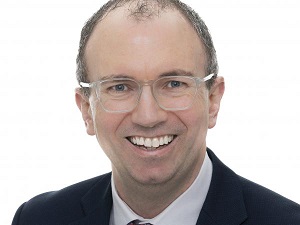