Award-winning Canadian songwriter Lynne Hanson returns to the Maritimes this month hot on the heels of Spring album release tours in the United States, England, and Europe. Hanson will play 12 shows in 12 days across Nova Scotia, New Brunswick and Prince Edward Island:

Too tough for folk and too blues-influenced for country, Lynne Hanson’s brand of porch music with a little red dirt can turn on a dime from a sunshine, blue sky ballad to a full-on thunderstorm of gritty Americana swamp from one song to the next. Her hard-living music has garnered her the nickname “Canada’s Queen of Americana.” And while her deep, bluesy croon has drawn comparisons to Lucinda Williams and Gillian Welch, it’s the poetry of her lyrics that really sets her apart.

Hanson is known for her high energy, roots guitar driven live performances, whether playing solo or with her band the Good Intentions. She has an uncanny way of connecting with her audience with an authenticity that is as entertaining as it is disarming bringing her sense of humour and spontaneity as a storyteller to the fore.

“On stage Hanson has a wonderful charm and disarming sense of humour … a spontaneity and honesty that enchants.” – Americana UK 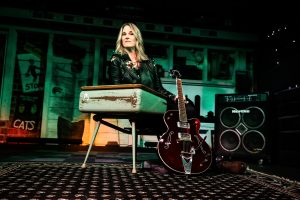