The future of green transportation in the City of Saint John took a big step today as the first full-sized, fully electric bus was officially put into regular service. The new bus was unveiled during a special ceremony to replace one of the diesel buses currently part of the Saint John Transit fleet.

“This event marks a major milestone in the transformation of the municipal transit system and highlights the City’s commitment to cleaner, sustainable and green transportation,” says Ian Fogan, Director of Saint John Transit.  “When compared to a traditional diesel bus, this electric model will not only reduce carbon dioxide emissions by nearly 50 tons annually but will also save at least $20,000 each year in fuel costs.”

The 40-foot bus has a passenger capacity of 41 people, can travel almost 300 kilometres on a single charge and has a low floor making it fully accessible. The bus, which takes just five hours to fully charge, was manufactured by BYD, the world’s leading battery-electric bus manufacturer with more than 50,000 vehicles on the road globally.

“Green transportation is the future of public transit systems around the world, and the City of Saint John will be a part of it,” says Nick Cameron, Chair of the Saint John Transit Commission. “We are taking bold steps towards becoming emission-free while also better meeting the needs of transit users.”

The electric bus is one of the first signs that riders and residents will see around the Saint John area as part of the broader Transforming Transit initiative. The City has a goal of running all Saint John Transit buses on electricity by 2040. 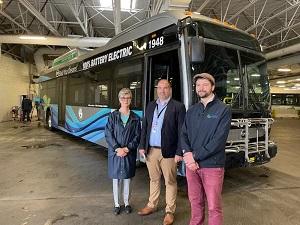