On behalf of Chief Robert Bruce

The Holiday in a Box campaign has concluded with an outstanding result. 467 packages have been collected and wrapped. These boxes contain several essential items along with treats and some other fun items.

The boxes will be distributed by the leadership of Saint John’s priority neighborhoods to ensure everyone has something for the holiday, especially our most vulnerable adults who can often feel forgotten at this time of the year.

Whenever you embark on a new campaign, requesting assistance during the holiday season, there is always a little apprehension on how it will be received. As community needs increase, people are confronted with the difficult decision on what organizations or campaigns they can support.

“The residents, community groups, corporations, members of the police force and students, just to name a few, went above and beyond to ensure the success of this campaign. Words cannot appropriately express the gratitude and appreciation we have for the significant contribution made. I do want to extend a personal, heartfelt thank you to all those who contributed. You have made a difference in the life of someone you didn’t know and that’s pretty special in and of itself” Chief Bruce said.

The Holiday in a Box campaign was launched November 16, 2021, and concluded December 18, 2021. Saint John Police Force staff and volunteers utilized their lunch breaks and weekends to wrap boxes and prepare them for delivery.

Our partners – Carleton Community Centre, Crescent Valley Resource Centre, P.U.L.S.E. Inc. Saint John, The ONE Change Inc., and The Waterloo Village Neighbourhood Association, will ensure each box gets delivered to a deserving individual in the city, making their holiday a little more joyous. 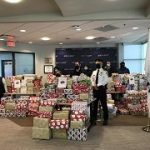