Between December 2 and December 31, 2021, the Saint John Police Force, will have a dedicated group of officers working to ensure the roads are safe from impaired drivers. “The Festive R.I.D.E.” (Reduce Impaired Driving Everywhere) campaign, will see officers make full use of their expertise, instruments, and authority to detect and charge impaired drivers.

“The Saint John Police Force intends to deliver a stern message that impaired driving will not be tolerated,” says Constable Travis Jones, Festive R.I.D.E. Coordinator. Throughout the four-week campaign, officers will work with Justice and Public Safety officials in areas throughout Saint John.

“Statistically speaking, the Christmas season comes with an increase in the number of occurrences of impaired driving. The goal of this campaign is to ensure the safety of the public and remind those motorists, who choose to operate a motor vehicle while impaired by drugs, alcohol or a combination of the two, they will be arrested” adds Constable Jones.

“Impaired driving is not an “accident.” If you suspect an impaired driver, call 9-1-1,” says Joyce Nickerson, President of the Saint John Chapter of M.A.D.D. (Mother’s Against Drunk Driving). The goal of M.A.D.D. is to stop impaired driving and to support victims of this violent crime. These injuries and deaths are 100 percent preventable,” adds Nickerson.

An amendment to the Criminal Code in 2018 has given officers stronger resources to combat impaired driving. Law enforcement can now demand a roadside breath sample from any driver that has been lawfully stopped.

“This amendment to the Criminal Code makes it easier to detect impaired drivers. Impaired driving is the leading criminal cause of death or injury in Canada and together, we can stop it” says Constable Jones.

The public play an important role in deterring and reporting impaired drivers to police. Together, we can keep our roads safe over the holiday and throughout the year.

The latest figures from Statistics Canada show that, impaired driving killed as many as 155 people in Canada in 2019. 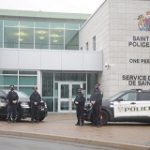