Saint John Firefighter Melissa Martin……In 2002 Melissa qualified as a Forest Technician from the Maritime College of Forest Technology in Fredericton. She then graduated from the Conservation Enforcement program at Holland College in PEI before being hired as an NB Conservation Enforcement Officer. In 2004 she was promoted to the position of Assistant Enforcement Manager of New Brunswick. Next she headed west where she worked as a Type 1 Helitack crew member dropping into remote areas fighting forest fires in Alberta. She then enrolled in the Firefighter program at Seneca college in Toronto before returning east and to us in 2008.
Martin is now assigned to “The Fighting Fives” as a driver/operator of Ladder 5 in the City’s Old North End. In addition to L5 which is a 100 foot aerial truck, she is also a driver/operator of LadderTower 1, our 120 foot platform that runs out of headquarters on Carmarthen Street. Arguably the most specialized and complex pieces of equipment on the job, Melissa is a skilled and competent operator, safely navigating the challenges posed by Saint John’s narrow and often congested streets. Recently Martin was one of 8 members accepted into the new SJFD professional development program which is designed to career path those who may aspire to a role as Command Staff. If successful, Melissa has the potential to be the first female Chief Officer in Saint John Fire Department history.
In her spare time Martin is a runner and accomplished equestrian who once represented New Brunswick at a national competition. Disciplines such as dressage, stadium jumping and cross country are events she enjoys. In 2018, and in tribute to First Responder mental health, she took on the gruelling run up Mount Washington in NH. (2:09:46….straight up!)

When recently asked what her greatest accomplishment has been the answer came very quickly, “That’s easy” she replied, “my 6 year old daughter…..my pride and joy”

A Mom, a Firefighter, and so much more we are proud of Melissa and look forward to seeing what the future holds for her…….Go get it Sister. 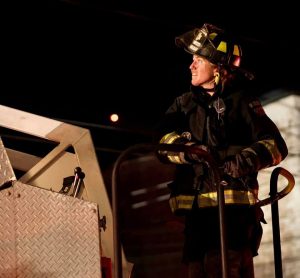