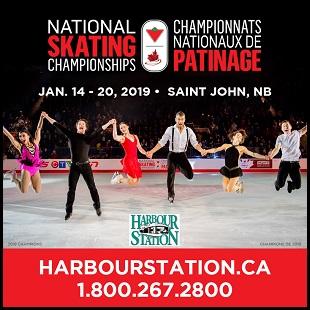 “Skate Canada is excited to host the 2019 Canadian Tire National Skating Championships in Saint John for the first time. This event is the highlight of the national skating calendar and we are thrilled to be able showcase Canada’s top figure skating talent at Harbour Station,” Debra Armstrong, CEO, Skate Canada. “We are looking forward to working with our partners in Saint John to put on a fantastic event and bring the joy of skating to the community.”

The championships will feature approximately 250 of the nation’s best skaters in the men, women, pairs, and ice dance disciplines, competing in three levels: senior, junior, and novice and is estimated to bring approximately $2.5M in economic impact to the city.

This will be Saint John’s first time hosting this event.

They also hosted the ISU World Junior Figure Skating Championships® in December of 1997.

For more information, visit on Harbour Station’s Website at: http://www.harbourstation.ca/event/2019-canadian-tire-national-skating-championships

← GNB News – New Brunswickers Should Get Ready For The Next Storms
2018 Friends of Ten Thousand Villages Saint John Sale – November 16th and 17th, 2018 →