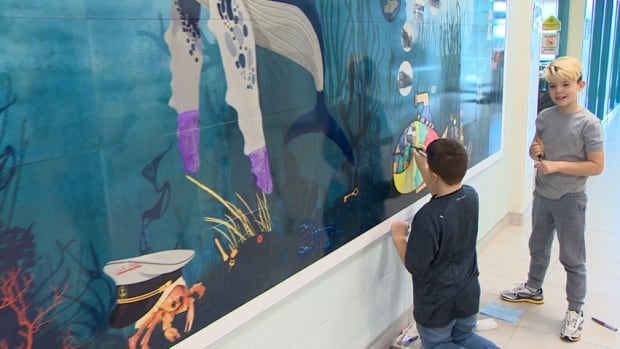 Most artwork is designed to be admired from a distance, but a new gigantic mural at Seaside Park Elementary School in Saint John encourages students, staff and visitors to add their mark.

The interactive mural, called Seaside Sightseeing, is made of durable, washable porcelain tiles.

It depicts a land scene on the left and a sea scene on the right, full of natural, educational and cultural imagery by local artist Jean Rooney that’s permanently baked into the tile.

But the 25 feet wide by six feet high mural located in the west side school’s lobby also has plenty of space for hands-on creations that can be wiped clean.

“I wanted [the students] to understand, ‘You are co-authors, you are co-collaborators. Yes, I may be an artist, but you’re an artist too,'” says Rooney. 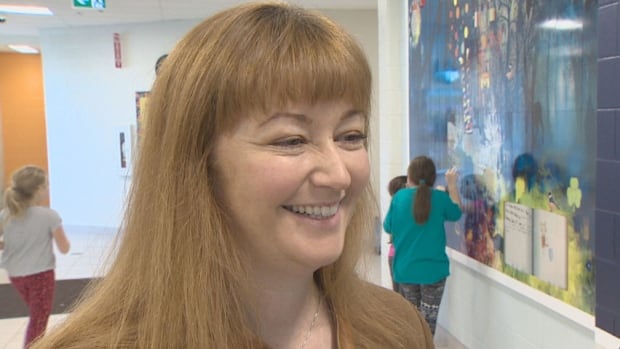 “So this becomes a giant invitation for them to actually have their voice and their say and to leave their mark” using whiteboard markers, pen markers, chalk markers or chalk paint.

It’s essentially a giant whiteboard, she says. Even so-called permanent markers can be wiped off.

It didn’t take Grade 5 student Grace Brown long to catch on to the concept.

“It’s kinda cool because I was thinking, ‘That book could use something and that submarine is kind of plain,'” she says. 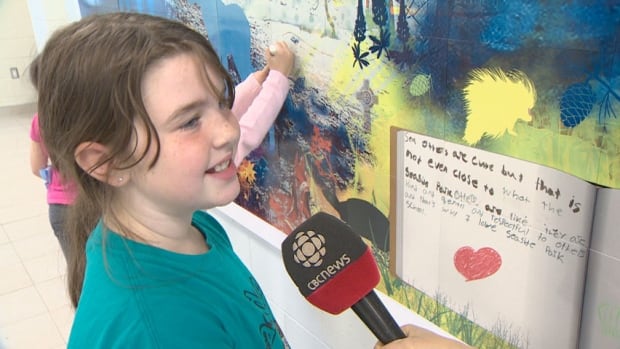 Grace penned an ode to sea otters in the blank white book and a drawing of the marine mammal, which is the school’s mascot, along with some seashells and a heart.

Classmate Adriana Sutton gave the moose some purple shoes “because that’s his favourite colour,” while Sam Crowley and Tyler Brooks added a burst of colour, stripes and shapes to the white submarine.

And while their creations are only temporary, “that’s part of the fun,” says Rooney. “You can start all over again.”

The mural, which was installed earlier this month, is part of the provincial government’s initiative to develop a one per cent public art program.

The Department of Tourism, Heritage and Culture developed the public art project at the new school, working with the departments of Education and Early Childhood Development and Transportation and Infrastructure.

A call for artists was issued last winter and Rooney, who is from Ireland but has made New Brunswick her home, was selected by a jury composed of parents, a professional artist, and representatives from the school district.

Rooney wanted it to be a “visual feast … a hive of activity” that would make people stop and say, “Oh my gosh, what is that?”

It includes images of wildlife, including a humpback whale, beaver, moose, eagle, turtle and coyote, as well as a playful lobster wearing boxing gloves and a hermit crab wearing soccer cleats.

There is also historical imagery related to the area, including Partridge Island, Martello tower, the Reversing Falls and Marco Polo ship.

And there are several objects related to Indigenous culture, such as sweetgrass, a wampum belt, and a traditional Mi’kmaq basket, along with a dedication in the top left corner, acknowledging “the land on which we gather is the traditional unceded territory of the Wabanaki peoples.”

The mural “enhances” the public space, but also “brings us back to this idea of play, which seems maybe at times very frivolous,” says Rooney.

“Within schools … there’s so much accountability. We’re tested and we’re measured and everything has to have an outcome or a product.

“And I think that when you bring art and you engage students in art activities, it allows them to take ownership of ideas and to actually kind of be more inventive, to be creative.”

With files from Elke Semerad