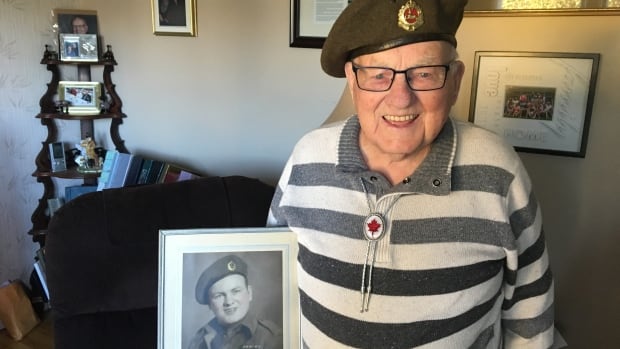 Second World War veteran Kenneth Briggs will be this year’s receiving officer at Harbour Station’s Remembrance Day service. He will lay the first wreath and take the salutes of the parade. (Matthew Bingley/CBC)

Each year, a veteran is chosen to lay the first wreath and this year Kenneth Briggs will receive the honour

This Saturday’s Remembrance Day ceremonies at Harbour Station will recognize all who served, but one veteran will receive a special honour on the day.

Each year, the service selects a receiving officer to lay the first wreath and take the salute during the parade. This year, that honour will go to 94-year-old Kenneth Briggs from Saint John.

Briggs admitted he didn’t know much about what’s in store for him with the post, but he said he was still honoured to be asked. With a chuckle, Briggs joked that he was only asked to take part in the ceremony because there are so few veterans left.

“I was only a private,” he said with a laugh. 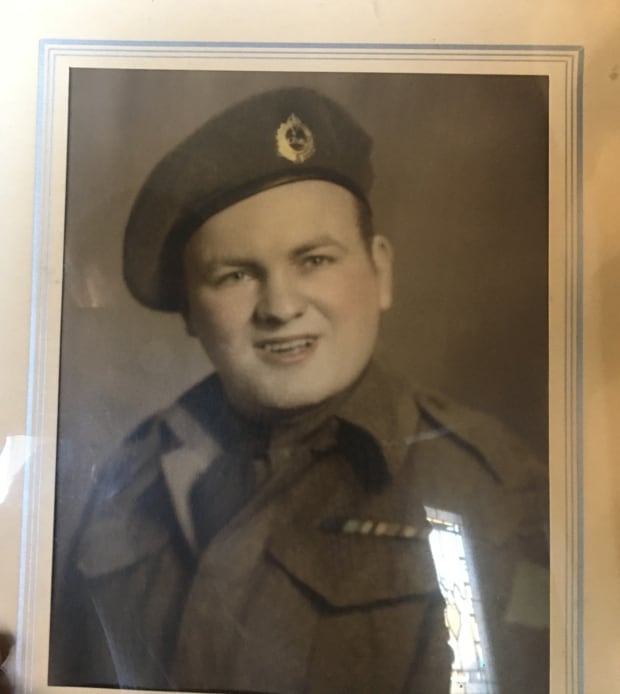 Briggs was the youngest of three brothers to serve during the Second World War. They all made it back alive, but Briggs remembers those who didn’t with a heavy heart. (Matthew Bingley/CBC)

It wasn’t easy for Briggs to get overseas to fight, in fact, it took a lie. A medical condition had kept Briggs from volunteering in the Air Force and the Navy and it was only after he omitted that detail on his Army medical, that he was allowed to serve.

Briggs sailed for England on Dec. 31, 1944 and soon wound up in Germany. But it was on his way to the front, where he met a familiar face in Ghent, Belgium.

“And of all things, on King Leopold Barracks,” he said “I run into a friend from Saint John who I played with when I was 15.”

That friend was Ron Doherty, who had lived next door to Briggs on Metcalf Street in Saint John’s north end.

The pair soon found themselves in Germany in their first battle, when he said an enemy plane flew overhead.

“Everybody was hitting the ditch, but Ronny and I,” Briggs said. “Well I’m telling you, the next time one went over we were in the ditch ahead of them!” 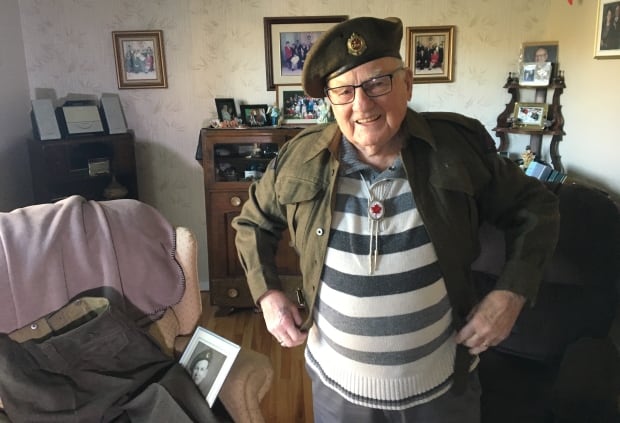 Briggs tried on his old uniform for the first time in about 20 years. “It didn’t fit then either,” he said with a laugh. (Matthew Bingley/CBC)

Soon after, Briggs’ regiment crossed the Rhine, the same medical condition he had fibbed about, took him out of the war.

“I had a lot of experience in a short, short period of time,” he said.

His friend remained to fight and Briggs said he was killed in Holland with about five days remaining in the war. It’s those like Doherty who didn’t return, that Briggs said he thinks about on Remembrance Day.

“It’s a sad time for me,” Briggs said “I think of the friend that I met when I went to the front lines, he’s still over there.”