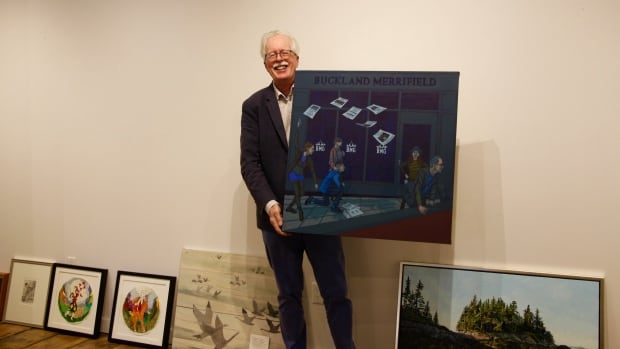 After three decades representing some of the region’s finest visual artists, fostering local talent, and curating over 250 exhibitions, Saint John gallery director Peter Buckland has announced he will retire later this week.

He was awarded a Diamond Jubilee Medal in 2012 for his work in the Saint John arts community.

Back in 1981, Buckland was drifting through a graduate degree thesis in sociology and feeling “burnt out,” he said. Unexpectedly, photographer Martin Flewwelling approached him, asking if he’d be interested in opening a gallery.

“I certainly was a young person with no business experience,” Buckland said. “Martin sensed something about my path before I did. I took a leap and was fortunate: I had a good eye and instincts for good artists.” 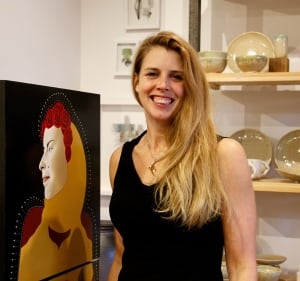 Shannon Merrifield, an established artist and gallery operator in her own right, will continue to run the BMG after Buckland steps down. (Julia Wright / CBC)

He and Flewwelling ran Windrush Galleries until 1986. Buckland spent nine years teaching English literature and drama at RCS-Netherwood before founding the Peter Buckland Gallery,  joining forces with potter and art specialist Shannon Merrifield in 2015 and moving into an airy, newly refurbished heritage space at 36 Canterbury St.

Over the decades, Buckland has helped oversee the maturation of artists such as Suzanne Hill, Paul Mathieson, and Herzl Kashetsky, and the rise of new artistic forces like Elizabeth Grant, Marie Fox, and Deanna Musgrave.

Buckland has also had some adventures: attempting to track down the subjects of mysterious paintings, getting involved in the sale of lost works by Miller Brittain, and devising innovative concepts for shows that “challenge the limits” of both artists and gallery spaces.

“He was so meticulous,” Buckland said. “Each album had to be installed 18 inches centre-to-centre, across, and up and down. We covered the gallery from floor to ceiling, right up around the desk, everywhere. At the end I looked at it and thought, ‘My god, what have I done, they’re doing to think I’m crazy.’ 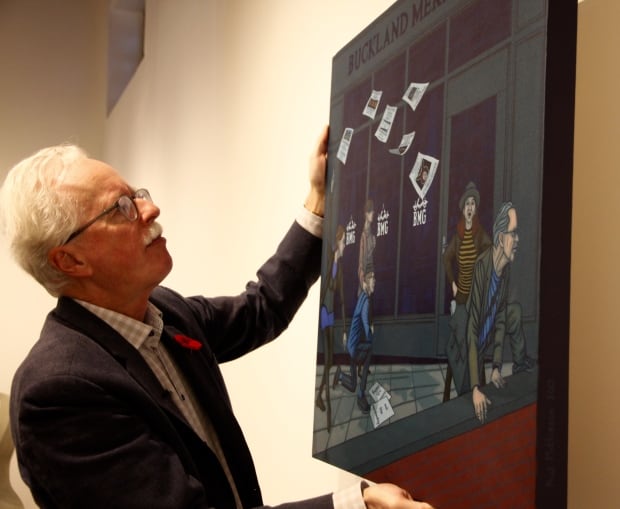 Buckland hangs a playful interpretation of his gallery by Paul Mathieson. This work, and some 29 others, will be part of Buckland’s Swan Song. (Julia Wright / CBC)

“But it was the best-attended show that year.”

Buckland was rewarded in the 1980s and 1990s by seeking out artists who broke ties with the influence of the Maritime realists and embraced new modes and styles.

“The nature of the artwork we can show in this city has changed dramatically since the mid-1980s,” he said.

After his retirement, Buckland and his wife, Judy Halassy, look forward to travelling and spending time with their children.

But while lengthy trips to Mexico and Europe are on the immediate horizon, he said, “Saint John is a beautiful city full of wonderful artists, and I don’t plan to leave permanently in any way.” 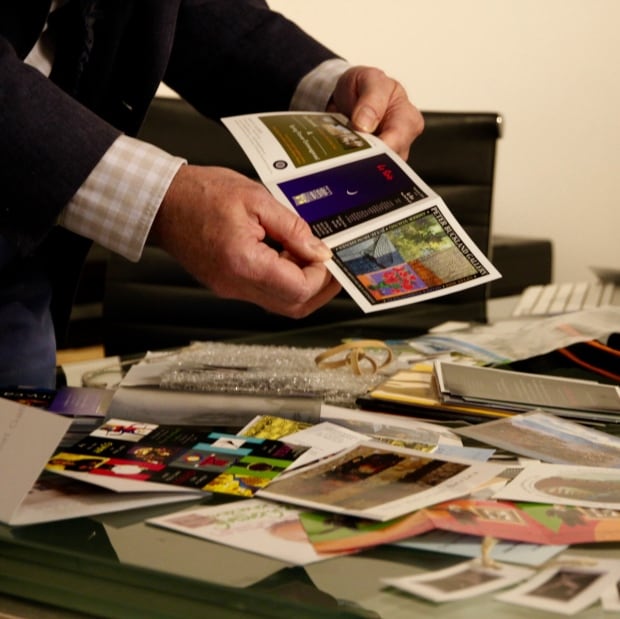 Buckland leafs through printed invitations, souvenirs from shows he’s curated over the years. They’ll be hung at his final show, which he sees as a ‘way to say thank you to them, for having faith in me and in the gallery.’ (Julia Wright / CBC)

Buckland’s final exhibition, Swan Song, will be held on Nov. 4, 2017, from 3 p.m. to 6 p.m. at the Buckland Merrifield Gallery. Merrifield, an established artist and art promoter in her own right, will continue to operate the BMG after Buckland steps down.

“We will miss Peter, but we’re looking forward to some exciting shows coming up,” she said. 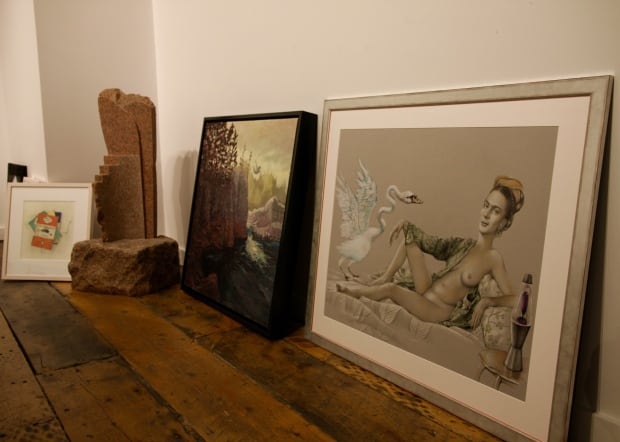 Works waiting to be hung at the BMG in preparation for the show on Nov. 4. Artists were asked to riff on the title, Swan Song, to eclectic and wide-ranging effect. (Julia Wright / CBC)

Dozens of printed invitations, souvenirs from shows Buckland has curated over the years, will be hung as a “way to say thank you to them, for having faith in me and in the gallery,” he said.

Asked what advice he would offer to the next generation of young people looking to enter into the world of fine art, Buckland answered succinctly.

“Take some chances,” he said. “Look deeply at the work. Choose well.”