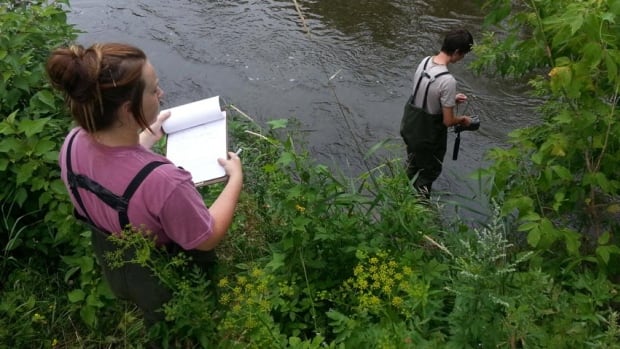 A group trying to understand and protect fish populations in the Kennebecasis River watershed is taking a closer look at Atlantic salmon.

The Kennebecasis Watershed Restoration Committee received $15,000 from the Atlantic Salmon Conservation Foundation to improve fish passage in the area.

The committee will study fish populations in Kennebecasis River tributaries and work with the Department of Transportation to remove barriers to fish at four different sites.

“We know there’s not actually a whole lot of Atlantic salmon returning to the Kennebecasis at this point,” said Ben Whalen, the group’s project manager.

‘To actually see results as far as fish populations go … that work’s going to have to be ongoing.’– Ben Whalen

The non-profit group conducts research and helps with restoration efforts in the Kennebecasis watershed.

The watershed is about 134,000 hectares, from Cassidy Lake and Mechanic Lake down through Sussex, Norton, Quispamsis and Rothesay, Whalen said.

Over the years, culverts have been installed along roadways, which Whalen said restrict the movement of fish through an area.

“Fish, a lot of time, can’t climb great drops, sometimes these culverts have a lot of drops at their mouth,” he said.

The group installs rock weirs that help elevate the flow at the mouth of the culverts, which improves passage.

This year, the work allowed fish to reach more than five kilometres of new stream they couldn’t access previously.

“The change is slow but it is starting to occur,” Whalen said.

Now the group wants to find out if there are juvenile salmon along the watershed and where they are.

The group will visit some sites where electrofishing is used to determine the presence of parr and smolt.

“If we have salmon parr, then obviously that means we have some native stock continuing to breed and keep the population going at least.”

Whalen said he wants to look at smaller tributaries to see if parr are there. It’s also important to look at the total diversity for the fish population, he said.

“To actually see results as far as fish populations go … that work’s going to have to be ongoing,” he said.