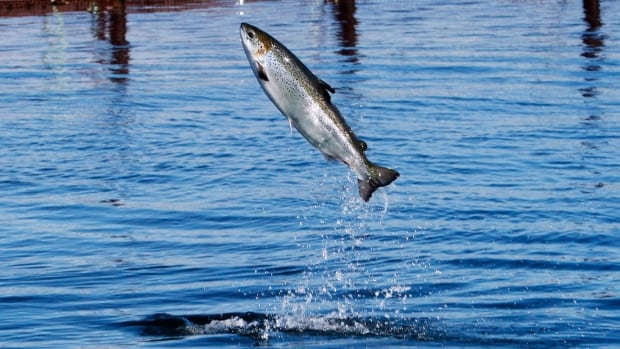 A change in stocking the Upper Salmon River has brought an increase in returning salmon in Fundy National Park. (Robert F. Bukaty/Associated Press)

A project aimed at bringing Atlantic salmon back to rivers in Fundy National Park has already seen some success.

The Fundy Salmon Recovery Project was set up to try to grow the dwindling stock of Atlantic salmon in the Upper Salmon River, which divides the national park and Alma.

Clarke said the project saw greater success after it changed its methods.

Originally, adult salmon were taken to a hatchery, where they spawned and the juvenile salmon were then released into the river.

Now, a greater number of adult salmon are instead released into the river to spawn, which makes the juvenile salmon native to the river and better equipped to survive.

Because adult salmon are difficult to raise in large numbers in a hatchery, the project partnered with Cooke Aquaculture. The seafood manufacturer grew the adult salmon, which are all from the same unique species found in the river.

Clarke said the change has resulted in salmon returning to the river.

“There are in those fish … a couple of wild fish that we haven’t yet actually got our hands on.”

Recent years have not been kind to the Atlantic salmon population in the Bay of Fundy.

“In the early 2000s, the inner bay Atlantic salmon population was listed as endangered under the Species At Risk Act,” said Clarke.

Clarke said there are more than 40 rivers that empty into the inner Bay of Fundy, between the St. John River in New Brunswick to the Minas Basin in Nova Scotia. These rivers are, by and large, salmon-free.

“Most of those rivers have no salmon at all,” Clarke said.

“Really, the only place they exist in this population right now is where recovery projects similar to ours are underway.”

While the goal of the project was to increase the number of salmon in Fundy National Park, the return of the fish has benefited the ecosystem as a whole.

“Science happening from the University of New Brunswick is showing the effects of these fish on the ecosystem is actually improving the base level of production of our ecosystems because these fish are here,” Clarke said.

On Thursday, the project will release thousands more salmon into the river.