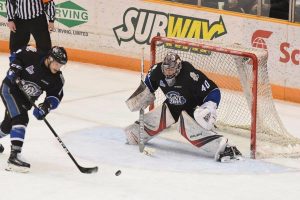 Goaltender Callum Booth has agreed to terms on a three-year, entry-level contract with the Carolina Hurricanes. The Hurricanes made the announcement on their website. Booth was selected by Carolina in the fourth round (93rd overall) of the 2015 NHL Draft.

The 19-year-old was named the QMJHL’s first star of the week and the Vaughn CHL Goalie of the Week for the period between March 6th and March 12th.