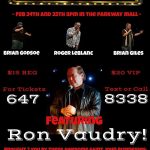 Ron Vaudry is a satirical genius at the edge of comedy, Vaudry guides audiences through a series of hilarious and thought provoking observations.

A favourite at the Just For Laughs International Comedy Festival in Montreal and The Edinburgh Comedy Festival in Scotland, Ron has parlayed his stand-up success into headlining appearances at major comedy shows across North America and the world.

Find more local events like this one in the Saint John Online events calendar. If you have an event coming up, add your listing for free.