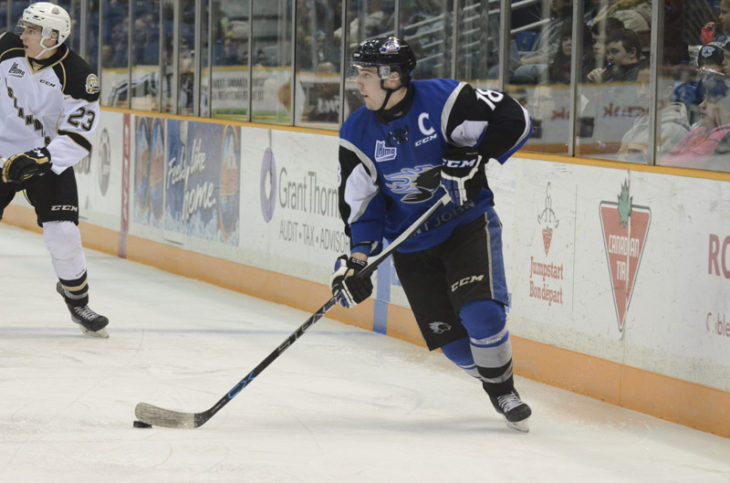 Spencer Smallman netted the first hat trick of his career and added an assist to lead the Saint John Sea Dogs to a 5-2 victory over the Charlottetown Islanders Wednesday at Harbour Station.

Bokondji Imama and Nathan Noel each had a goal and an assist for Saint John (9-4-1-0) while Luke Green picked up two assists.

The Sea Dogs got the game’s first goal on the power play nearly five minutes in.

Mathieu Joseph took a pass in the right circle and sent the puck across the ice to the left circle for Smallman. The Saint John captain ripped a low one-timer past a sprawling Matthew Welsh in the Charlottetown goal.

The Islanders tied it while shorthanded when Chlapik carried the puck into the Sea Dogs’ zone, used a Saint John defenceman as a screen and whipped a wrist shot off the glove of Sea Dog goalie Alex Bishop and just across the goal line.

Smallman’s second of the night gave Saint John the lead again with five minutes left in the second period.

As the Sea Dogs enjoyed another power play, Green took a pass in the high slot and slid it into the left circle for Smallman, who snapped a one-timer past Welsh’s blocker.

But the visitors evened the score again before the period ended when Aquin took a drop pass near the top of the right circle and rifled a knee-high wrist shot that snuck past Bishop’s glove.

Saint John grabbed the lead for good under two minutes into the third period.

Matt Green took a shot from the left circle that Welsh stopped. Imama tucked the rebound home on his backhand.

A little over a minute later, Jakub Zboril fired a wrist shot from the left point that Noel deflected past Welsh’s blocker. The goal was reviewed to see if Noel’s stick was too high, but the goal call on the ice stood.

As a trailer on a rush into the Charlottetown zone, the Fredericton product took a drop pass from Noel and blistered a wrist shot off Welsh’s glove and into the goal.

Bishop made 15 saves for the win. Welsh turned aside 29 shot in defeat.

Smallman’s hat trick and four points made him an easy choice for first star while Imama’s two points and five hits prompted a second-star selection. Luke Green grabbed third star with his two helpers in front of 2,707 fans in attendance.

The Sea Dogs’ next game is Friday, October 28th, at 7 p.m. against the Moncton Wildcats at Harbour Station. It’s Halloween Night with the Sea Dogs! Come and join the biggest Halloween party in Saint John! The best costumes win some great prizes, including a fire pit courtesy of Moosehead Breweries.

Tickets are available at the Harbour Station Box Office and online. Be sure to visit our website for details on our Halloween six-pack – six Upper Bowl flex vouchers starting at $96.