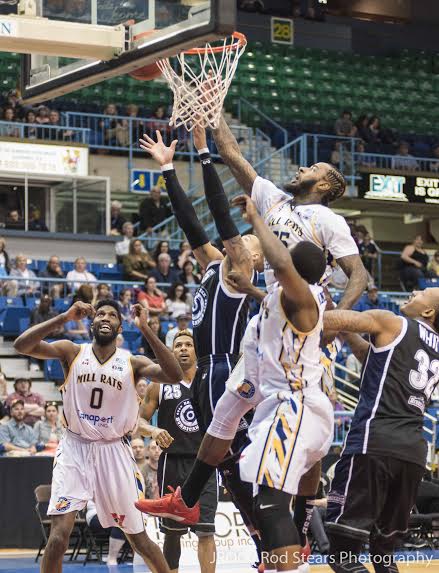 The Saint John Mill Rats season came to a painful end at the hands of the #1 Halifax Hurricanes, 109-90, capping off a 4-0 sweep by the powerful Hurricanes.
The Mill Rats were determined to try and dig themselves out of a 3-0 series hole after dropping an overtime home game the night before, but it was not to be.
Saint John trailed 26-18 after the first quarter but cut score to 34-32 in the second quarter.  Halifax then rattled off 17-8 run to lead 51-40 at the break.
In the third quarter the score got out of hand and Saint John realized their season was slipping away with every tick of the clock.
“We take our hats off to the Halifax Hurricanes organization,” said Mill Rats President Ian McCarthy. “They were our toughest opponent all year and you had to play mistake free to beat them.”
Final box score: http://www.nblcanada.ca/14522/scores-schedule
The Mill Rats organization would like to thank the fans, sponsors, staff, and volunteers for their support season long.  This wrapped up the Mill Rats 6th season in the Port City, and their 5th in the NBL Canada.

There will be a fan meet and greet to say goodbye to the team on Monday night from 6-7 PM at Jungle Jim’s on Prince William Street.
← Protect yourself against Lyme disease
Port Days 2016 Offers Expanded Business Programming →