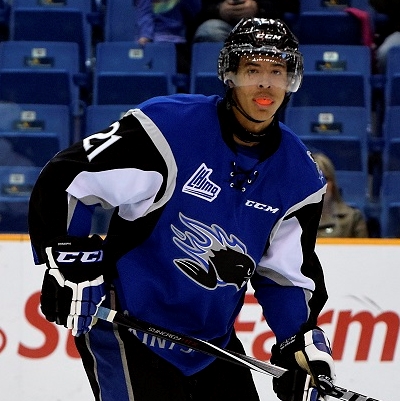 The Saint John Sea Dogs have announced their player and student of the month awards for December.

Forward Mathieu Joseph is the Irving Oil Player of the Month.

Joseph, 18, had at least one point in all ten Sea Dogs games in December, totalling nine goals and 18 points along with a +7 rating. Highlights included a hat trick and four points against the Acadie-Bathurst Titan on December 28th and two goals and three points against the Moncton Wildcats on December 9th. The native of Chambly, Quebec, had a points streak of 12 games that began in late November.

Defenceman Oliver Felixson of St. Malachy’s High School is the Swagelok Student of the Month.

The 17-year-old from Helsinki, Finland, continues to make a smooth transition into the New Brunswick education system. Felixson is working diligently to improve his English with his English Language teacher and English tutor. He often studies and completes his assignment independently, but has the confidence to approach his teachers and school administrators when necessary. Felixson was also nominated for student of the month in October and November by Jennifer Craft, the guidance counsellor at St. Malachy’s.

(NOTE: This season, for the Swagelok Student of the Month Award, one player each is nominated from University of New Brunswick – Saint John (UNBSJ), St. Malachy’s High School, and Ecole Samuel-de-Champlain for CEGEP students. One winner is chosen from the nominations, which are based on attitude, effort and academic performance. Nominations were not held for December due to exams.)